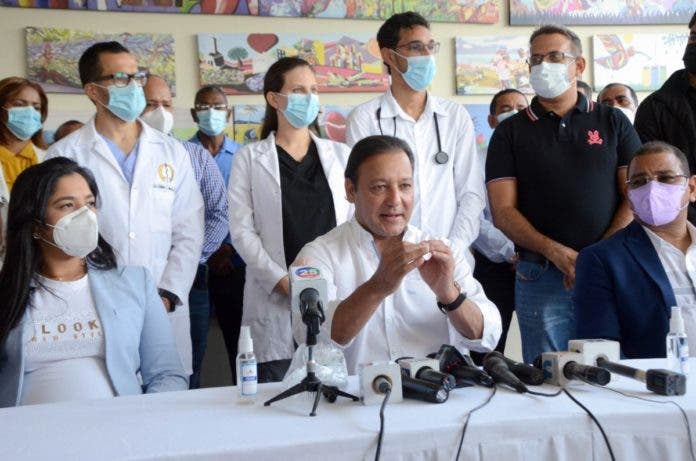 SANTIAGO – Mayor Abel Martínez put at the disposal of the central government all his personnel, equipment, rooms of the Municipal Palace, and all the municipal premises and spaces in support of the measures being implemented against the Covid-19 pandemic affecting the country.

He also reported that, within one month from the date, anyone who does not have the vaccination card would be regulated from entering municipal public spaces and the parks of Santiago de los Caballeros, considering that it is essential and mandatory. “It is a matter of moral obligation and conscience that each person gets vaccinated,” he expressed.

“At this moment as city council, we put ourselves at the disposal of the institutions of Public Health and those of the Cabinet of Health of the Government, so that together we fight and fight against this terrible disease or terrible evil that affects us,” he said at a press conference accompanied by the different departmental directors of the town hall and the councilors of the Partido Popular.

Martinez said that the province of Santiago, although it is the least affected, does not mean that it is neglected, so he called all the citizens to get vaccinated and carry out the recommended measures to alleviate this disease.

He pointed out that all the departments of the Municipality of Santiago, all the vehicles, the halls in the Municipal Palace, and the different municipal properties are at the disposal to support any plan that goes with the mission to protect the citizens.

The mayor stressed that it is essential that every Dominican citizen and especially Santiago know that vaccination is vital. It will help us come out with profit from this fight waged by all humanity and that we must all fight together.

“Currently, as the corresponding institutions have said, we are in a calamitous, tragic situation, at this moment of the pandemic, which leads us to be responsible,” he said.

Abel Martínez added, “It does not mean that because Santiago is not among those provinces that are in a worse situation, we should not take care of ourselves, on the contrary, we must redouble our efforts to protect our citizens, the elderly, women, men, children, youth,” he explained.

Martínez was accompanied by the deputy mayor Leonela Massiel Espinal, the municipal secretary, Jhonny Pichardo and the aldermen of the Dominican Liberation Party, in the Municipal Council, headed by its president, Ambioris. González and the entire medical team of the Mayor’s Office.