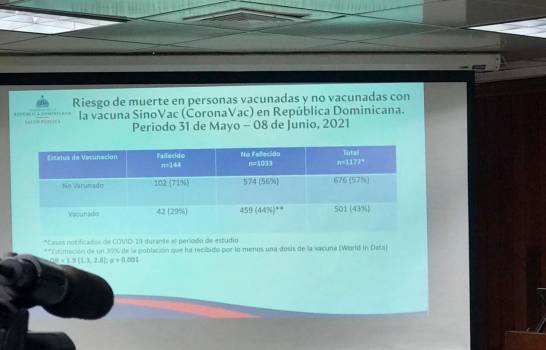 The Ministry of Public Health revealed this Wednesday an analysis carried out by the institution during the period from May 31 to June 8, 2021, on people admitted to intensive care units (ICU), which reveals the death of 144 people due to COVID-19, of which 42 had received at least one dose of the Sinovac vaccine.

However, the study reveals that unvaccinated people are twice as likely to die from COVID-19 as those who have received the biologic.

“There is a risk of two times more people dying if they are not vaccinated than if they are vaccinated,” said the COVID-19 advisor of the Ministry of Health, Eddy Perez Then.

According to the information provided by the ministry, of the people admitted to the ICUs, 676 had not been vaccinated, and 501 had received at least one vaccine. However, the analysis does not distinguish the number of deaths between people with one or both doses.

Perez Then explained that the ministry is conducting several studies on the virus’s behavior and how they will counteract its spread.

“This was an analysis of the deaths we made in patients who were in intensive care units in the Dominican Republic and we saw the possibility that those patients who had died if they were vaccinated and were not vaccinated,” explained the advisor.

In this sense, Perez Then urged the population to continue to go massively to get vaccinated since the vaccine also protects against all variants.

“The variants are somehow a cause for concern, because they tend to make less effective the actions we could be doing to mitigate the impact,” said the advisor.

Regarding the circulation in Puerto Rico of the Delta variant, a mutation of great concern worldwide because it generates more hospitalization and mortality, Pérez Then explained that “fortunately” the vaccines can cover these variants.

Perez Then explained that from the ministry,, they are alert to the circulation of variants. They are working on developing a platform in the National Laboratory to identify variants in the country.

He also pointed out that the country is trying to acquire new medicines to reduce the complications of people with COVID-19.