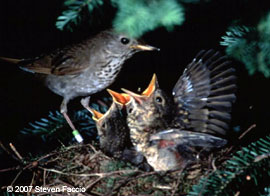 Norwich, VT – The Vermont Center for Ecostudies (VCE) recently announced that it has received funding from a Neotropical Migratory Bird Conservation Act (NMBCA) grant, administered through the U.S. Fish and Wildlife Service (USFWS).

Under this program, more than $3.8 million in federal funds will be matched by more than $14 million in partner contributions to support migratory bird conservation projects in 19 countries across North, Central and South America.

The Vermont Center for Ecostudies, in cooperation with Grupo Jaragua, a conservation organization based in the Dominican Republic, will use funding provided by the NMBCA grant to complete a strategic conservation plan for Sierra de Bahoruco National Park, one of the largest and most biodiverse areas in the West Indies.

It also provides critical overwinter habitat for many migratory birds, including the rare Bicknell’s Thrush. However, Sierra de Bahoruco National Park is under serious threat from illegal deforestation for agriculture and the production of charcoal.

The strategic conservation plan will identify key actions to help protect the remaining forest and restore areas that have been damaged.

Balancing forest conservation and the needs of local communities is only going to happen through partnership and sound science, said Dr. John Lloyd, VCE’s Director of Science.

“This grant will allow VCE and Grupo Jaragua to convene a collaborative, results-based planning process, and offers us a real chance at implementing solutions that will benefit people and wildlife and that will ensure the long-term health of the magnificent forests of Sierra de Bahoruco,” stated Lloyd.

According to the USFWS, hundreds of species of neotropical migratory birds that migrate to and from the United States each year, including songbirds, shorebirds and birds of prey, will benefit from this funding.

Because the program works throughout the Western Hemisphere, it is able to support the full life-cycle needs of migratory birds who may spend summers in the United States but winter in the Caribbean or Central or South America.