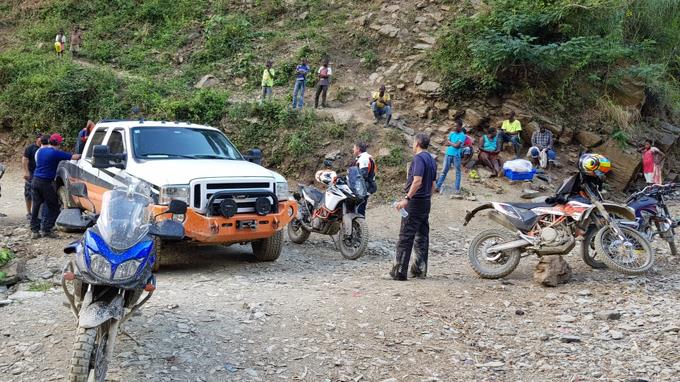 The incident, uploaded to social media.

Santo Domingo.- Prominent cardiologist Pedro Ureña on Mon. denounced that he and a group of seven friends and colleagues were kidnapped for several hours on the Dominican side of the International Highway, by a mob of dozens of Haitians armed with knives, machetes and ice picks.

“They pushed us, they took our motors, our cell phones, our keys and cornered us in a place with other Dominicans who had passed by, peasants who were doing their jobs and kept us there for almost three hours,” Ureña said on El Zol 106.5 FM.

He said the incident occurred near the town Restauracion, and despite having two Dominican Army soldiers, “they did nothing.”

“When they were asked why they didn’t do anything, their response was that they could not intervene, they could not use public force in such demonstrations, since foreigners allegedly protested that a motorcycle had been seized from a compatriot in Dajabón,” he said.

“We were able to leave thanks to the Dominicans who were there who are from the area, who told them that we were Americans, they told us not to talk, that we kept our helmets on and after a lot of negotiation, they began to tell us ameriquen, ameriquen, ameriquen, and then they let us go,” the doctor said.

Ureña described the young Haitians as aggressive and credited the mayor of a Haitian community for preventing harm to the Dominicans.