Traffickers’ high caliber weapons a threat to the State: expert 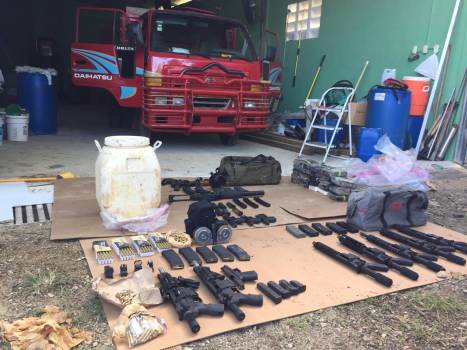 Santo Domingo.- The authorities have seized, both in Dominican territory and abroad, more than 1,585 kilos of drugs so far this month, not counting the 23 bundles seized as part of the last operation which also found an arsenal of high caliber weapons.

According to security expert Daniel Pou, the weapons found with 282 bricks (697.5 kilos) of cocaine in Bayahibe (southeast), in the hands of trained people could challenge any govt. agency.

“The weapons that have been detected in recent seizures are, not only high caliber, but high quality weapons, which are not found in a popular black market because they are expensive rifles. Organized crime is arming its people,” he said.

Seized in the raid with the 697.5 kilos were, initially all 23 packages on a farm, and nine rifles, seven M-16s, one GSC and one AK-47, 5 Glock pistols, ammo clips and hundreds of rounds.

For Pou, the large amount of drugs seized during December results from production glut in producer countries and rising demand in consumer nations.