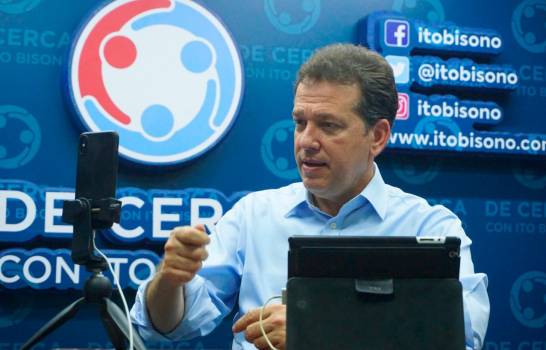 The deputy of the Christian Social Reform Party (PRSC), Víctor –Ito- Bisonó, warned that the country runs the risk of “becoming a paradise for crime” with poor citizen security and criticized that during the last two decades the authorities have ignored said situation and allowed the occurrence of crimes.

“We have a systematic problem of crime and corruption in which, even if some networks are apparently dismantled, they will always end up being replaced by others that are more sophisticated and more powerful,” Bisonó, who has aspirations for the presidency, argued in a press release of the Republic.

The political leader would have expressed in his program “De Cerca Con Ito” that the authorities are “making a show with the face of crime” but not fighting their causes.

Bisonó predicted that if the United States does not participate in the prosecution of criminals “nobody knows anything or does anything” and recognized drug traffickers such as Florián Féliz, Quirino Ernesto Paulino or Figueroa Agosto would be allowed “to mock laws as well as further corrupt existing ones.”

The deputy spoke about the issue of a powerful drug trafficking network headed by the fugitive Cesar Emilio Peralta aka “The Abuser” in operation of the National Directorate of Drug Control (DNCD) co-operated this week with the the Administration for Drug Control (DEA) and the United States Federal Bureau of Investigation (FBI).

“This is an issue that we have to politicize even more, since these are actors who want to continue infiltrating politics. We need a true and sincere pact for a country determined to defeat organized crime, a fundamental step in search of prosperity. It was the same as Colombia at the time, overwhelmed by drug cartels in the 80s and 90s and that achieved one of the most amazing transformations at all levels. We have that within our reach, but it will not come by magic but through sheer political will. We must send a message to our continental allies, mainly to the United States that is the largest of all, expressing that they can count on the Dominican Republic in this fight against drugs, laundering, and terrorism,” concluded the presidential candidate.