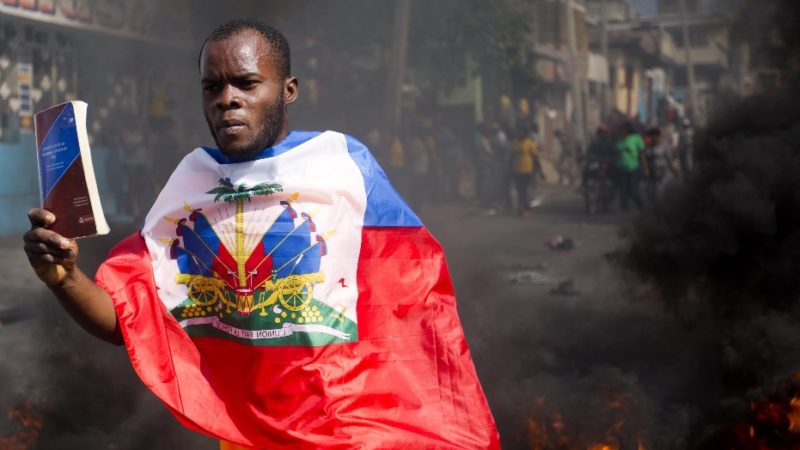 A demonstrator draped in the Haitian flag, holds up a copy of the Haitian constitution, during a protest to demand the resignation of President Jovenel Moise and required to know how Petro Caribe funds have been used by the current and past administrations, in Port-au -Prince, Haiti, Thursday, Feb. 7, 2019. Much of the financial support to help Haiti rebuild after the 2010 earthquake comes from Venezuela's Petro Caribe fund, a 2005 pact that gives suppliers below-market financing for oil and is under the control of the central government. (AP Photo / Dieu Nalio Chery)

The Undersecretary of State for Political Affairs of the United States, David Hale, is visiting Haiti, where he has held a meeting with the country’s president, Jovenel Moise, to seek a solution to the political, economic and social crisis that continues to plague the Caribbean nation.

During the meeting with Hale, the president expressed his commitment to “dialogue with all sectors so that peace can return to Haiti.” As President Moise published in his profile of the Twitter social network, where he also stated that “the initiatives to find a concerted solution to the crisis they are increasing.”

The US official’s agenda in Haiti also includes meetings “with Foreign Minister Bocchit Edmond and other political leaders,” the US embassy in the country said in a statement.
These meetings also aim to discuss “the pressing challenges” facing Haiti, as well as the need for “an inclusive national dialogue and to have a functional government capable of restoring order, maintaining the rule of law, expanding the economy, and serving the Haitian people.”

Hale arrived this morning in Port-au-Prince from Nassau, Bahamas, where he met with Prime Minister Hubert Minnis and other authorities to discuss US support for the recovery of Hurricane Dorian.