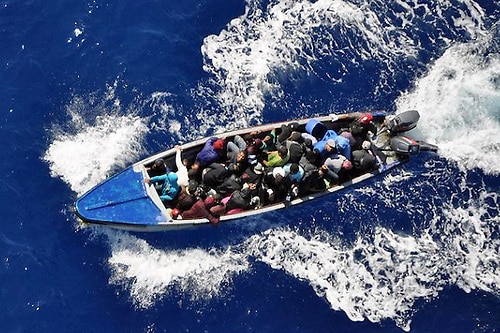 Santo Domingo, Dominican Republic.- Members of the Navy of the Dominican Republic arrested in Matanzas, María Trinidad Sánchez province, 18 men and a woman who were part of a group of 50 people who intended to travel illegally to the neighboring island of Puerto Rico, the institution reported Monday.

The detentions and the frustration of the illegal trip took place this weekend as part of a large land and sea operation throughout the national coast that allowed its members to be intercepted when they tried to board a clandestine manufacturing vessel of about 30 feet in length and six feet in width.

A statement from the Navy indicates that next to the boat, which was burned on the same beach from which it was leaving, several gas bottles, outboard engines, food supplies, and utensils with which they intended to make their journey were found.

The detainees were taken to the Directorate of Naval Intelligence (M-2) of the institution, for research purposes, said a press release.

On the other hand, the Navy informed that a court of the Criminal Jurisdiction of the province of La Altagracia, imposed three months of preventive detention against Deiby Reyes Reyes, for having participated in one of these trips as captain of a vessel intercepted last 7 December on the high seas.

The organizers of illegal trips take advantage of the Christmas season festivities to increase their illegal activities with the sole purpose of profit, so the authorities increase the monitoring of coastal and territorial waters.