Runoff leachate from garbage dumps a threat to Lake Enriquillo 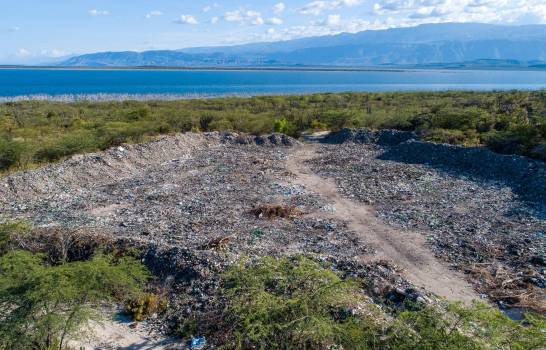 In the foreground the La Discoierta dump and in the background, the beauty of Lake Enriquillo.

A view of the La Discoierta landfill area, in the Independencia province, portrays the contrast between the clean blue of Enriquillo Lake and the garbage that takes up space in an inappropriate place to dump refuse.

A green strip of bayahonda, cacti and other plants typical of arid areas acts as a separator between garbage and lake waters. The municipal authorities are aware that the garbage deposit is not the best place, but little or nothing is done to keep it from spreading.

The environmental agency knows the reality and knows that over time the water of that natural resource could come into contact with leachate, waste such as plastics, organic matter and other elements incompatible with pristine nature.

This is a still small landfill where about 20 tons of waste per month will end up from the towns of La Discoierta, Bartolomé and other communities of the six municipalities and municipal districts that make up the province Independencia.

The deposit does not present organic waste in large quantities because mountains are formed mixed with soil, but when it rains the leachate runs down the slopes and as in the case of the one located in the part of Neiba, it will eventually discharge into the lake.

The amount of glass in the dump that is more visible than the garbage itself is striking.

The municipal mayor, Pascual Pérez Benítez, is in favor of the fact that the landfill is not in that place because it is a protected area and tells that he works on a project with the Center for Research and Popular Education (CIEPO) to make a modern landfill that has less impact in the environment.

It includes educating people to recycle the waste they produce from their homes and thus reduce aggressions to the environment.

“We agree with what people say that the landfill must be moved from there, although it is not so close to the lake, we will try to move it to another area that affects Lake Enriquillo less because we are fully committed to that position,” says the mayor.

He is in favor of a solution where instead of each municipality and municipal district having a landfill, communities are unified to restrict their dumping into no more than two places on both sides of the lake and thus reduce pollution levels.

So far Dominican Clean has not arrived, although it should be a priority because landfills around the lake threaten that natural resource, attractive to nationals and foreign visitors alike.