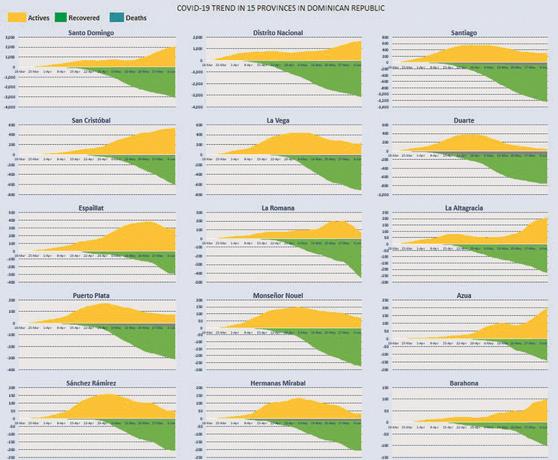 Of 15 provinces subject to monitoring by the COVID Health Emergency Management Committee in the country, 11 have already flattened the epidemiological curve of virus incidence or are in the process of accelerating growth, according to a report by the agency.

Among those provinces, Greater Santo Domingo, Azua, Barahona, and San Cristóbal still maintain an upward trend in the epidemiological curve, as the number of cases continues to rise, but the rest show a flattening of the curve or a slowdown in incidence, bringing the number of affected people closer to that of those recovered.

The province with the highest flattening and which is on its way to becoming the first to overcome COVID-19 in the country is Duarte, which was the first in the country to present a critical situation due to the disease, overwhelming the capacity of the local health system, is the one that maintains the highest case fatality rate so far, with a cumulative 84 deaths. Yesterday he registered eight new confirmed cases and 811 accumulated.

A flattening is also registered in Santiago, another of the provinces where the greatest number of patients were treated, with a record to date of 76 accumulated deaths and 1,580 accumulated cases, of which 17 were new in yesterday’s report.

According to the special bulletin number 83 of the National Epidemiology Directorate released yesterday, the behavior of the epidemic varies in the provinces under monitoring, with Greater Santo Domingo registering the highest incidence with the registration of five of the six new deaths recorded in the last 24 hours of notification and 273 cases of the 393 new positives registered. To date, the country registers 550 deaths and 20,808 accumulated positive cases.