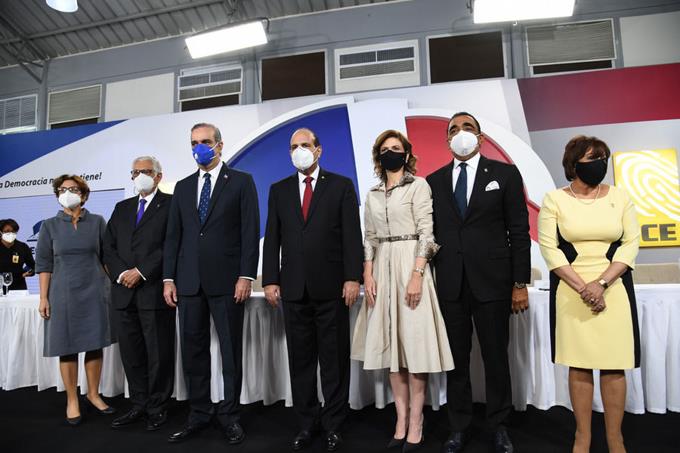 The president-elect, Luis Abinader, and his ballot partner, Raquel Peña, together with the full JCE, in the act of handing over their election certificates. JOSÉ A. MALDONADO

The president-elect, Luis Abinader, assured yesterday that the best times in the country are yet to come, and called on Dominican society to embrace hope and work together to achieve it.

Abinader delivered a speech in the act in which the Central Electoral Board (JCE) gave him the election certificate with the vice president-elect Raquel Peña, for the period 2020-2024.

“The only thing we must fear is fear itself because after the darkest dusk the brightest dawn comes out and it will be so in our beloved Dominican Republic,” he said.

He maintained that he will always work to unite and not to divide, so from August 16 he will act without distinction of a party in the task of people’s health and revive the country’s economy.

Abinader said that together with President Danilo Medina he is leading a coordinated transition process so that fundamental government decisions that are underway are not lost.

“We are defining a government cabinet to act immediately,” said the president-elect after promising a healthier country where no one is forgotten.

Abinader and Peña received yesterday the certificate that accredits them as president and vice-president-elect in the general elections on July 5.

The event was held in the multipurpose hall of the JCE, with the presence of the plenary members of that institution, led by its president Julio César Castaños Guzmán.

The official declaration is contained in Resolution 66-20, which establishes that Abinader and Peña obtained 2,154,866 (52.52%) of valid votes from the Modern Revolutionary Party (PRM) and allies, an amount greater than the absolute majority, established in the Constitution, to succeed in the first electoral round.

Abinader thanked the Plenary of the JCE for making the elections possible in the most difficult circumstances, as well as the citizens who decided to leave their homes to exercise their right to vote.

Castaños Guzmán congratulated the JCE for emerging successfully from this electoral process, after having difficult moments. The process had started last October with the internal conventions of the political parties. He also thanked, with joy, the people for exhibiting exemplary conduct and performance that places it as a country at the level of “great democracies.”