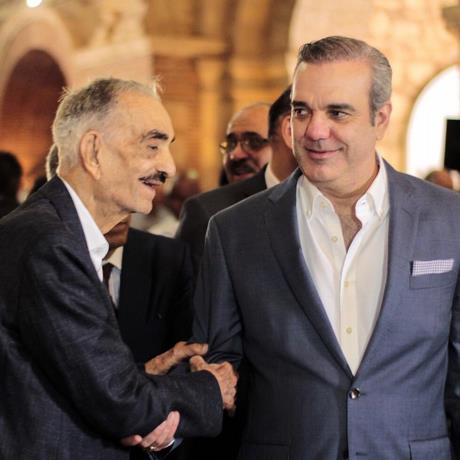 Abinader said that this honest and ethical government was what his father wanted and also how he dreamed it, regarding his aspirations for the presidency of the Republic.

The message of the Dominican president-elect occurs on the eve of the celebration in the country of Father’s Day.

“Today, I cannot congratulate him by embracing him, but my gift will be, from where he is, to make him proud of presiding over an honest and ethical government as he wished and dreamed. Thanks for your example! Congratulations to all the Dominican parents!” wrote the president-elect in his account on the social network Twitter.

José Rafael Abinader’s attempts to be President of the Republic go back to three official candidacies: 1982, 1990, and 1996 and in none of those attempts was he able to achieve his objective.

José Rafael Abinader Wassaf was born in Tamboril, in the province of  Santiago in 1929, he was a writer, a doctor of law, an expert in finance and public administration, he was minister of finance (today the Ministry of Finance), vice-rector of the Autonomous University of Santo Domingo, general controller of the Republic, general director of Income Tax, director of the National Budget Office and senator for the province of Santiago for the Dominican Revolutionary Party from 1998 to 2002.

In 1998 he was elected senator of Santiago by the PRD and in 2000 he supported Hipólito Mejía and in 2008 Miguel Vargas Maldonado.

His death occurred on November 5, 2018, at the age of 89, two years after his son ran for the country’s presidency for the first time.

In the case of Luis Rodolfo, in 2016 it was the first time that  Abinader aspired to the presidency, he lost with 35.13% of the votes. Danilo Medina, the current president, had won with 61.91% of the support of the electorate.

2019  was the year when Abinader made the decision again to put all his efforts into becoming the country’s president for the period 2020-2024 and on October 6 in the simultaneous primaries of the PRM, Abinader reached the first step to achieve his dream. He beat the former president, Hipólito Mejía, with 74.11%, who also aspired to represent the party in the presidential elections, and obtained 21.17% of the votes.

Then, in the general elections, held on July 5, he triumphed with a victory with 52% of the votes against Gonzalo Castillo and the Dominican Liberation Party.

On August 16, he will take the oath and fulfill the dream shared with his father: to be President of the Republic.