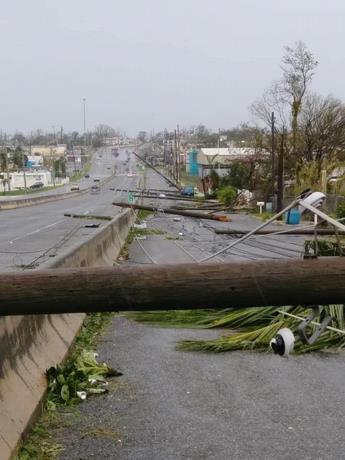 Almost half a million people are without electricity in Puerto Rico due to the passage of the Isaías storm, which has also caused landslides, floods and has left some roads, most of them in the interior of the island, cut by the fall of power lines and/or vegetation, all in the midst of the coronavirus pandemic.

Tropical storm Isaías this Thursday put his finger on the weak electrical system of Puerto Rico, which according to the main union, the Union of Workers of the Electricity and Irrigation Industry (UTIER), has left “about half a million” ( 431,568) without electricity and according to PREPA, 27% of the 1.5 million subscribers that the island’s main electricity company has.

Most have been without light since this morning in the heat of the storm, mostly due to the fall of the power line by winds with gusts of up to 56 miles per hour (90.12 kilometers per hour) that have been reached according to registers.

This Wednesday, US President Donald Trump declared a state of emergency in Puerto Rico in the face of the storm, with which the Federal Emergency Management Agency (Fema) will be able to allocate federal resources to “alleviate the difficulties and suffering caused by the emergency in the population.”

The atmospheric phenomenon that follows the south of the island, due to its disorganization and magnitude, is affecting the entire territory, including the north where the capital is located, leaving heavy bands of rain.

For its part, the National Weather Service (SNM) has issued a flash flood warning for the south, north, and east of the island, due to the rains caused by the tropical storm.

Some parts of the capital, San Juan, are flooded, and city council staff work to pump the water that collects from, in many cases, sewage with rubble and debris.

Isaías has already caused several landslides, which has resulted in the transfer of citizens to the shelters and road blocks.

There are currently two refugees in the Cecilia Lebrón Ramos school in Patillas (south), the same number in Ponce at the Bernardino Cordero Bernard vocational school, and another in Caguas, as reported by the island’s police.

Agents assigned to the police district of Coamo (south) reported a tree obstructing Highway 779 so that both lanes are obstructed.

At the moment there are no reported injuries.

Highway 3 from Juncos to Caguas is also obstructed, due to power lines on a truck, and by falling trees on the tracks, roads 183, 916 and 181 in San Lorenzo (east) and for the same reason roads 189 and 181, in the interior of the island.

In turn, there are landslides in Aguas Buenas, 37 kilometers from San Juan inland.

The main shopping centers of the islands have opened but two hours later than their usual hours, although some banks, such as FirstBank, have decided not to open.

In addition, the Aqueduct and Sewer Authority (AAA), in charge of the water supply, has decided to open the gates of the Carraízo dam (north), which just a week ago was at its last stage and had led to water rationing. for around 140,000 customers, due to a sudden rise in their level.

The island has been in a state of emergency due to the drought for several weeks and is expected to be lifted after the storm, it is also in the middle of the pandemic due to COVID-19, which has already left about 201 dead. and more than 5,000 cases and about 9,400 probable.

The La Plata dam in Toa Alta, in the north, has also been opened.

Although the storm is moving towards the Dominican Republic, it continues to create gusts of wind and rain.