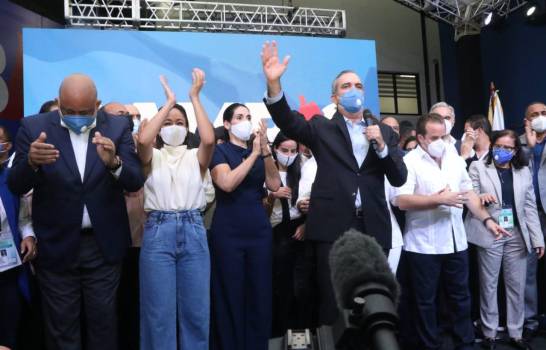 Luis Abinader on the night of July 5 as he celebrated the victory with his leaders and family.

From today, the first of August, the countdown of the 15 days for the inauguration of Luis Abinader, president-elect in the presidential and congressional elections of last July 5, begins.

Abinader will be the eighth president of the Republic in the Fourth Republic, and he will do so after winning the elections of the fifteenth period of a democratic election since 1966.

Abinader has announced the appointments of 35 officials, of whom 16 are ministers, two cabinet ministers, three are female CEOs, two male CEOs, five vice ministers, a superintendent of Banks, confirmed to the governor of the Central Bank and announced to a tourism adviser already one of the economies.

The country will receive a very adverse outlook in the midst of a health and economic crisis that has incubated the COVID-19 pandemic.

From the Cabinet, he still has to officially announce those designated in the ministries of Higher Education, Science and Technology, Culture, Agriculture, and Environment and Natural Resources.

The greatest challenge and pressure at the level of positions is for the appointment of an attorney general’s office of the independent Republic, the promise of a campaign where groups have proposed it to various personalities to be appointed.

Since before arriving, Abinader has planned a process of state reform through the reduction of institutions, such as the Office of Supervisory Engineers of State Works (Oisoe) and the State Sugar Council (CEA).

The Abinader administration will create a new ministry, that of Housing, taking as its platform the current National Housing Institute (INVI).

The transfer of command ceremony will be reduced in the number of people since the protocol of the pandemic will only have diplomats, dignitaries, legislators, incoming vice-president, outgoing president and vice-president, presidents of the Supreme Court of Justice, Constitutional Court, the Senate, the Chamber of Deputies and close relatives of the president.

After being sworn in and taking possession, Abinader will go to the National Palace to swear in the members of his cabinet who will accompany him to the Tedeum in the Primada Cathedral of America and to the floral offering to the Altar of the Fatherland.

The traditional military parade was also canceled to avoid crowds on the Malecon in Santo Domingo, due to the increase in community transmission of COVID-19 in the country.