From Bosch to Abinader: the vice presidents and secretaries of state who have attended swearing-ins in the Dominican Republic 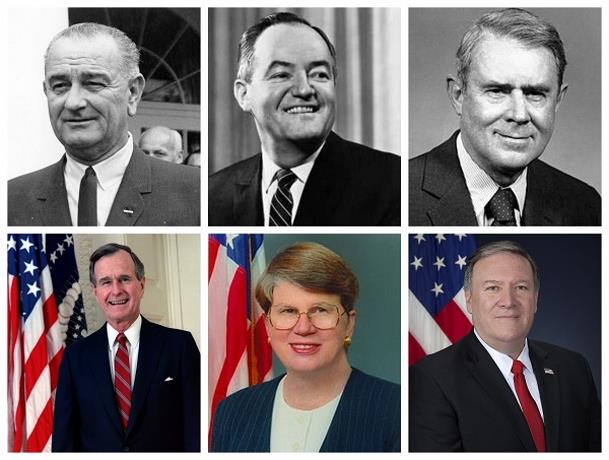 During the last 57 years, different US government representatives have participated in presidential inaugurations on Dominican soil. This August 16, the Secretary of State of the United States, Michael (Mike) Pompeo, will be present at the ceremony to be held in the National Congress.

Vice presidents, prosecutors, secretaries of state and other members of the US government have come to the country to participate in activities related to the inauguration of new governments before the National Assembly.

The inauguration ceremony of Joaquín Balaguer, on July 1, 1966, was attended by the Vice President of the United States, Hubert H. Humphrey, representing President Lyndon B. Johnson.

According to a text published on the cover of LISTÍN DIARIO on June 20, 1966, President Lyndon B. Johnson announced the information and congratulated the Dominican president. In the message of congratulations, he also appointed John Hugh Crimmins, from Maryland, as the United States ambassador to the Dominican Republic.

Newspaper reports at the time indicate that Humphrey was accompanied by the Secretary of State’s assistant for inter-American affairs, Lincoln Gordon; Bourke Blakemore Hickenlooper, Senator from Iowa; Hale Boggs, a member of the Louisiana State District as well as Cornelius E. Gallagher, who was a representative for the 13th District of New Jersey.

A publication from July 6, 1966, points out that diplomatic missions from ten countries came to the Dominican Republic to attend Balaguer’s swearing-in. These missions included retired Major General Julio Humberto Lula Ferreccio, head of the Peruvian mission, the wife of the vice president of Costa Rica at that time, Teresa de Calvo, among other authorities.

There is no specific data regarding personalities invited to the newspapers’ presidential inaugurations corresponding to 1966, 1970, and 1974.

However, a news cable published by the EFE agency on August 16, 1986, the day Balaguer was sworn in for his third presidential return, specifies that the United States Secretary of State, George Shultz, came to the Dominican Republic on behalf of the US President Ronald Reagan.

Likewise, the same presidential inauguration was attended by the Nicaraguan President, Daniel Ortega; the Minister of the Interior of Spain, José Barrionuevo; the president of El Salvador, José Napoleón Duarte, and of Panama, Eric del Valle, among other representatives from 31 countries.

Antonio Guzmán, from the PRD, was sworn in on August 16, 1978. US Secretary of State Cyrus Vance attended his inauguration ceremony.

A report from the Spanish newspaper “El País” lists at least six hundred guests at the ceremony, however only Vance’s special visit stands out. In the presidential speech, Omar Torrijos, head of the Government of Panama, was also mentioned.

On August 16, 1982, Salvador Jorge Blanco took office as the 61st president of the Dominican Republic.

Among Jorge Blanco’s special guests was George HW Bush, who was vice president of the United States in the Ronald Reagan administration.

On August 16, 1996, Leonel Fernández, the first president representing the Dominican Liberation Party (PLD) in the National Palace, was sworn in before the National Assembly.

Among the guests were Pedro Roselló, Governor of Puerto Rico; Rafael Caldera, President of the Republic of Venezuela; Fernando de Borbón, Royal Prince of Asturias; Rosny Smarth, Prime Minister of Haiti, among others.

Hipólito Mejía, who was sworn in on August 16, 2000, was represented on behalf of the United States by the attorney general at that time, Janet Reno, and along with the official delegation was attended by the American writer born in the Dominican Republic, Julia Álvarez.

Likewise, the president of Ecuador, Gustavo Noboa; the prince of Spain, Felipe de Borbón (Félipe VI); the president of Venezuela, Hugo Chávez, among other personalities of international political life.

The first time that Danilo Medina was sworn in before the hall of the National Assembly, in Congress, he was in front of personalities such as the Prince of Asturias, Felipe de Borbón; Taiwanese Vice President Wu Den-yih; the president of Honduras, Porfirio Lobo Sosa; President of the Republic of Haiti, Michel Martelly; the president of Panama, Ricardo Martinelli; President of Colombia, Juan Manuel Santos. The official data did not indicate if there was a visit from a representative of the United States.

While on August 16, 2016, Danilo Medina began his second presidential term. When giving his speech at the beginning of the government he was in front of Thomas Pérez, Secretary of Labor and special envoy of the United States Government; the United States Ambassador to the Dominican Republic, James Brewster; the emeritus king of Spain Juan Carlos; the president of Ecuador, Rafael Correa; Juan Carlos Valera Rodríguez, president of Panama; Nicolás Maduro, president of the Bolivarian Republic of Venezuela, among others.

The president-elect of the Dominican Republic, Luis Abinader, will be sworn in for the first time before the National Assembly in a historic ceremony amid the coronavirus health crisis.

The designated Foreign Minister, Roberto Álvarez, confirmed that Mike Pompeo would lead the US delegation accompanied by the US diplomat and manager of the Western Hemisphere, Michael Kozak.

While the Spanish delegation for the inauguration is to be chaired by the Minister of Foreign Affairs, Maria Aranzazu González Laya and made up of the General Director for Iberoamerica and the Caribbean, Rafael Garranzo García.