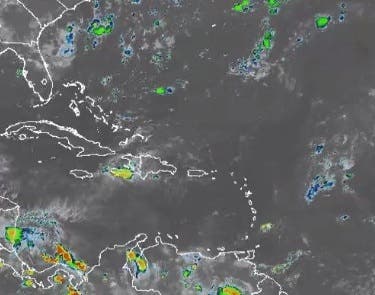 According to the most recent ONAMET bulletin, this system has a 90% probability of becoming a tropical depression today, and a tropical cyclone in the next 48 hours.

Today, in much of the country, the atmospheric conditions will be generally stable due to the entry of an air mass with lower moisture content, predominantly a sunny sky with scattered clouds.

However, due to the incidence of a trough at high levels and the local effects on the southeast, the Central Cordillera, and the border area, cloud cover will increase, favoring scattered showers with possible isolated thunderstorms, mainly in the afternoon.

For tomorrow, Wednesday, a tropical wave will be arriving in the afternoon, which, together with the effects of a trough in the medium and high levels will cause moderate to intense downpours at times, electrical storms and isolated gusts of wind towards eastern towns, southeast, and the Cordillera Central. For the rest of the country, expect slight increases in clouds and little rainfall.

The recommendation to the general population is to avoid prolonged exposure to solar radiation from 11:00 am to 4:00 pm, also, drink enough fluids and wear lightweight clothes, preferably light colors due to the high temperatures that occur presently.