After 54 years, women rule again in the provinces of the DR 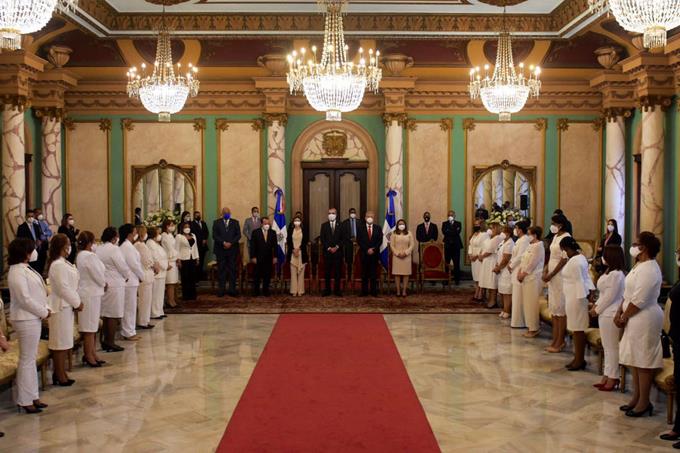 President Luis Abinader swore in yesterday 31 provincial governors during a ceremony at the National Palace together with Vice President Raquel Peña and other officials.

President Luis Abinader yesterday became the second Dominican head of state to designate only women as provincial governors in the last 54 years.

Abinader once again broke a tradition of placing men as provincial governors, after the late president Joaquín Balaguer swore in 26 women in the 26 provinces’ governorships that existed when he triumphed in the elections of June 1, 1966, as a candidate for the Reform Party ( PR).

Balaguer expressed at the governors’ swearing-in ceremony on Wednesday, July 6, 1966, that he had decided due to the great support he received from women in the elections. That support allowed him to defeat his strong opponent, former President Juan Bosch, candidate of the Dominican Revolutionary Party (PRD).

Since then, Balaguer began the period known as “The 12 years” until 1978, when he was succeeded by Antonio Guzmán, and Jacobo Majluta (42 days), and Salvador Jorge Blanco, from the PRD, until 1986.

The reformist leader returned to government in 1986 for ten years until 1996, when he was replaced by President Leonel Fernández of the Dominican Liberation Party (PLD).

President Abinader swore in the 27 provincial governors this Tuesday afternoon, of the 31 that he had announced last July, in the middle of the transition process.

The swearing-in ceremony was held in the Los Embajadores room of the National Palace. Also present were the vice president Raquel Peña, and the ministers Lisandro Macarrulla, from the Presidency; José Ignacio Paliza, administrative officer of the Presidency; Mayra Jiménez, from Women, and Roberto Fulcar, from Education.

The governors will represent the President of the Republic in their respective provinces or boundaries, as established by the Organic Law of Public Administration number 247-12. They are responsible for complying with a series of obligations conferred by Law number 2661 of Attributions and Duties of the Civil Governors of the Provinces, for the proper functioning of the granted province.

This Law of Powers and Duties of Governors was promulgated on December 19, 1950, during the dictatorial regime of Rafael Leónidas Trujillo. In other words, the new governors appointed by Abinader must take into account multiple responsibilities.

Abinader had announced through his Twitter account that in the 31 provinces of the country, he would appoint women as of August 16 and that local female leadership should be encouraged and promoted.

The president triumphed in the first electoral round with 52.52%, defeating Gonzalo Castillo, of the PLD, and putting an end to the PLD dynasty, which led the nation’s destinies since 2004.