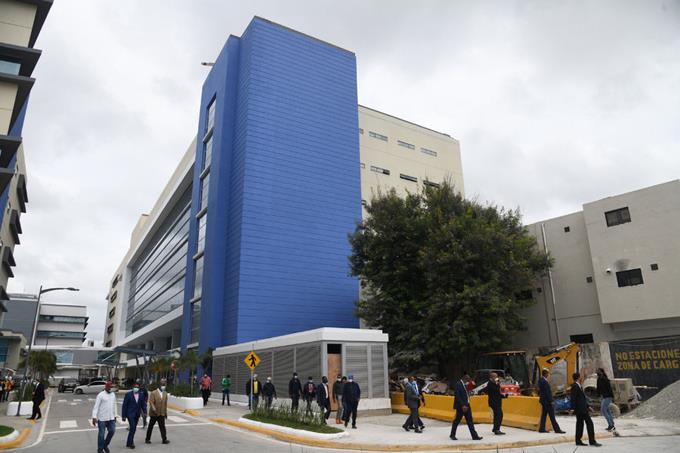 The Sanitary City & ldquo; Luis Eduardo Aybar & rdquo; It will be one of the works started by the Danilo Medina government that will be audited.

Several officials, including ministers from Abinader’s administration, asked the Chamber of Accounts to conduct audits to see how funds were used.

The President of the Republic, Luis Abinader, said yesterday that there would be audits of all the works that started in the past government of Danilo Medina.

Abinader indicated that among these projects will be the new Luis Eduardo Aybar Sanitary City, of which the new president learned its details yesterday.

“Audits will be made of all the processes of the past government, as is common when a government arrives … of everything,” said the president during the visit he made yesterday to the facilities of the modern medical center, and the questions of journalists.

During the activity, President Abinader announced that for the last months of this year.

On July 9, 2013, the Office of Supervisory Engineers of State Works (Oisoe) and the Ministry of Public Health carried out the first blow to the hospital work. Newspaper reports indicate that the investment is approximately four billion pesos.

Yesterday, several officials reported that they requested audits on the portfolios placed in their charge.

Among them is the new Minister of the Environment and Natural Resources, Orlando Jorge Mera. He asked the Chamber of Accounts to carry out an audit of that institution’s administrations from January 2017 to August of this year.

The request sent to the president of that entity, Hugo Francisco Álvarez Pérez, seeks to have a technical report on the administrative-budgetary reality of the last three years, in the administrations of Domínguez Brito and Ángel Estévez.

Jorge Mera also asked the Accounts Chamber to send the final reports for the period 2015-2016.

According to the minister, the audit will allow knowing the administrative management “and will serve as a starting point to evaluate transparently and objectively the transformations that are coming as a result of the plans that will be being implemented.”

Also, the request is part of the Abinader government’s announcement, which this week specified that the leading institutions will be audited via the Chamber of Accounts.

Engineer Carlos Bonilla, current director of the National Housing Institute (INVI) and honorary interim manager of the Office of State Works Engineers (OISOE), which is in the process of being liquidated, formalized an extreme urgency request before the Chamber of Accounts of the Dominican Republic to audit the past administrations that led those entities.

Bonilla Sánchez requested the Chamber of Accounts to conduct two technical-legal audits and an investigation on everything related to public contracting, budget addendum contracts, change orders, recognition of debts, and payment release, among other actions.

“I have instructed the technical and legal teams of the INVI and the OISOE to proceed (under current regulations) to carry out a national public tender for the hiring of two private auditing firms in this first week of management, to develop another comprehensive audit of both the INVI and the OISOE,” highlighted Carlos Bonilla Sánchez.

Besides, it requested that the budget executions, payroll of the institution, and everything that the Chamber of Accounts deems necessary to render accounts to Dominican society on the administrative procedures of the INVI and Oisoe between 2012 and 2020 be audited.