The Dominican Republic prepares for storm Laura; Abinader has an emergency plan 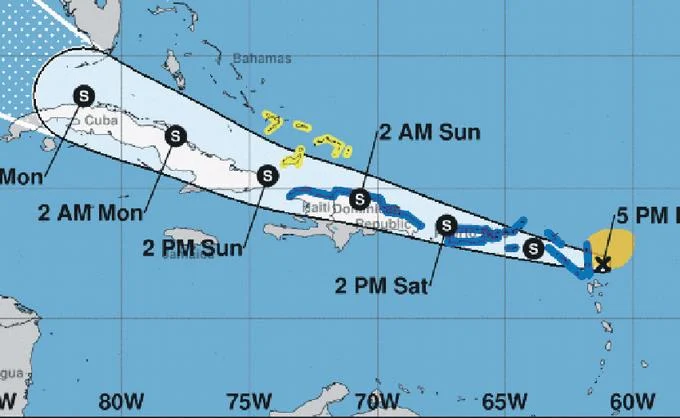 COE activates an emergency plan and will make mandatory evacuations to prevent flooding before Laura’s arrival.

President Luis Abinader ordered last night, in a mandatory and preventive manner, evacuations in vulnerable areas and under alert as a precautionary measure against the passage of tropical storm Laura through the DR.

The measure was announced at a press conference after the president finalized a meeting with the National Emergency Committee. The action was also taken to increase the red, yellow, and green alerts for 22 provinces. COE issued a red alert for nine provinces, yellow for five and green for another eight.

The director of the National Meteorology Office, Gloria Ceballos, assured during a press conference that the degree of impact that the country will have would be more forceful than that expected when it moved east-northwest.

Last night Meteorology changed from alert to a tropical storm warning from Cabo Engaño to Manzanillo Bay, which means that within 36 hours or less, the storm could affect those areas with strong winds, abnormal tides, high waves, and heavy rains. Very strong.

Abinader also instructed relief agencies to protect Dominican families’ lives and property, before the passage through the country of storm Laura, by activating the Lightning Plan.

He ordered the Economic Canteens, the Social Plan of the Presidency, Public Works, the National Housing Institute (INVI), the Ministry of Defense, Civil Defense, and the Navy, to be ready to help the families.

Haiti also activated an orange alert yesterday and is preparing for the lash of heavy rains and gusts of wind, mainly in the north of the country.