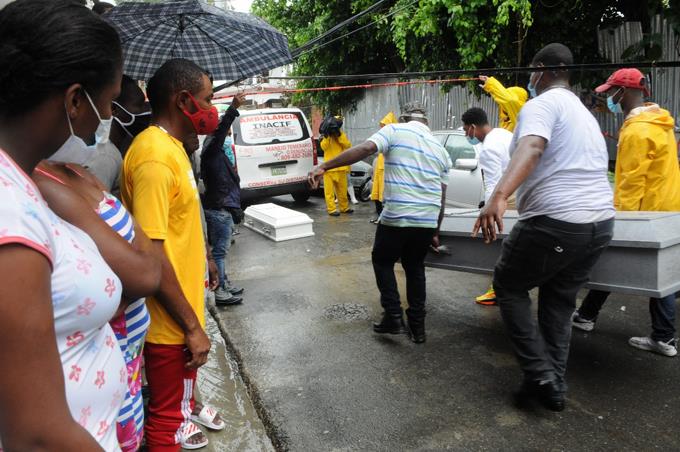 The reports of floods, landslides, landslides, and entire communities cut off from communication are numerous, and with the passage of Tropical Storm Laura, this was no exception.

The floodwaters of the main tributaries of some provinces left towns, streets, and communities cut off, making transit impossible and causing the flooding of dozens of homes. At the same time, the glens did their part in Greater Santo Domingo.

Traces of the atmospheric phenomenon were registered in each province, affecting 755 homes and leaving around 3,375 evacuated people.

What is always a shock is the count of fatalities caused by the ravages of torrential rains, which began to be felt more intensely in the Dominican territory from two in the morning on Sunday.

The total death toll from Laura is four, according to statements by President Luis Abinader, while perhaps the saddest story is found in the incident that occurred at kilometer 14 of the Duarte highway, where the rubble of a wall buried a mother and her seven-year-old son.

A wall under construction in the Las Palmeras sector, collapsed yesterday morning, leaving a family disconsolate and an entire community outraged.

The victims were identified as Claritza Frías Nival, 44, and Darwin Frías, 7.

According to the relatives of the victims, Claritza’s eldest son, Starling, left around 2 in the morning to see the panorama due to the heavy rains, realizing that the wall was collapsing and giving the warning voice to his mother who returned to look for the youngest son, both of them trapped.

According to that sector’s residents, Claritza was a single mother who raised her three children without them getting into trouble with people and without causing more significant harm.

“Claritza fought for her children. The father of the first two died, and the boy’s father was never responsible. Even so, she took her family forward, and I want you to see those boys are all decent and never got into trouble,” said one of Claritza’s neighbors.

Darwin was seven years old, and although he was only in the second year, his teachers defined him as an “intelligent child” since he learned things very quickly to be the first time that he received education in a college or school.

The relatives ask that justice is served. The owner of the construction company appears and takes responsibility for what happened since they had asked him to be careful with this construction that did not comply with the corresponding safety regulations.

In the Puerto Rico neighborhood of the La Guayiga municipal district, a young man only identified as 20-year-old Milton died at dawn when a tree fell on him due to the winds caused by the storm.

According to the neighbors, the young man had lived in the place for approximately two years.

The tree fell at 2 am on the small house built with a zinc roof and boards. The young man was sleeping.

A corporal from the Specialized Land Border Security Corps (Cesfront) drowned when trying to cross drainage derived from the currents towards this Dominican side of the river that divides from Haiti.

The soldier was identified as 45-year-old Carlos Ariel Paniagua de la Paz. His body was deposited in the Dr. Elio Fiallo hospital’s morgue, from where the superiors made an effort to transfer him to his native community, although his origin was not stated.

According to preliminary data, the deceased tried to cross an arm of the river that divides the province of Pedernales with Haiti.

The official report of those affected will be released by the Emergency Operations Center (COE) this morning.