Solid waste law would be ready next week 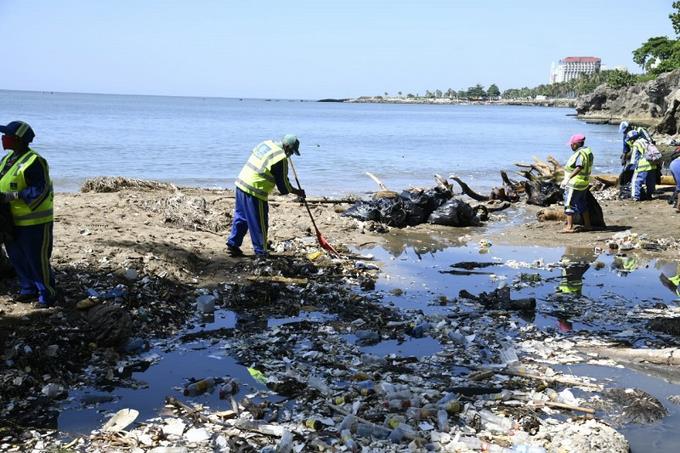 The change of government and members of both chambers of the National Congress, in addition to several periods of inactivity due to the outbreak of coronavirus (Covid-19) in several of the legislators, the bill seemed to fall back into the hole of oblivion where lasted more than 15 years. Photos Victor Ramírez

The Minister of the Environment, Orlando Jorge Mera, informed yesterday during the cleaning day of the country’s beaches that this law would be ready as of next week

After years of discussions and being stalled between the chambers and different commissions that make up the National Congress, the draft Law for the Comprehensive Management of Solid Waste Co-processing of the Dominican Republic left the hands of the Legislative Power at the end of July. It was sent to the Executive for future promulgation.

The law was highly anticipated in the environmental sector, and the expectations indicated that it be promulgated in “brevity.” But President Danilo Medina, just one week after the end of his mandate, chose to return the referred bill to the Chamber of Deputies because of considerations that two transitory provisions need to be modified.

After the change of government and members of both chambers of the National Congress, in addition to several periods of inactivity in the hemicycles due to the coronavirus outbreak (Covid-19), the bill seemed to fall into the hole of oblivion where it sat more than 15 years, after appearing for the first time in 2004.

However, the Minister of the Environment, Orlando Jorge Mera, reported yesterday during the country’s beaches’ cleaning day that this law would be ready as of next week.

“Next week we will have the solid waste law, which is decisive because, with this, the Ministry of the Environment will have the legal authority to sanction companies that unfortunately flood the market with plastics and other types of products that damage the environment. ”, Reported Jorge Mera.

The bill aims to prevent the generation of waste, establish the legal regime for its production and management, and promote its reduction, reuse, recycling, and other forms of recovery. It also proposes to regulate contaminated soils, guarantee everyone’s right to a good environment, and protect the population’s health.

This law is applied in the field of activities, processes, and operations of the integral management of solid waste from generation to reuse or final disposal, including the different sources of its generation in the economic, social, and population sectors. It also includes the activities of importation and transit of waste through the national territory.

“As always, the Law is not what one would like, nor is it ideal, but it is a legal text on which one can work. Now the Chamber of Deputies to approve the law known to all,” added the Environment Minister.

The project, approved on July 23 and sent to the President of the Republic, establishes that permanent programs for the recovery and elimination must be promoted and, at the same time, force the reduction of the use and distribution of plastic covers and materials made from foam.

“As of the approval of this law, producers of fon (foam), sleeves, and plastic bottles will be obliged to join a specific program of extended producer responsibility to recover, treat and safely dispose of the waste generated. In the case of fon (foam), compounds must be incorporated to convert said locally manufactured products into oxodegradable or biodegradable,” specifies the legislation in one of its transitory provisions.

Every year, the Ministry of Environment and Natural Resources must study the impact of the programs to reduce and eliminate foam, covers, and plastic bottles.

The law says that a particular public awareness program will also be created, including traffic, municipal, and tourist police training. A unique payment program for the recovery of funds or plastic covers will be printed. Payment will be made by volume and will only apply to recyclers.

Why was it returned?

According to the document, dated August 7, President Medina says that it is necessary to modify article 172, paragraph II, numeral 8, which has two drawbacks since it has a kind of privileges in favor of specific people or companies for tons of solid waste processed.

“Committing retroactively and without an apparent time limit the funds of the reference trust, and on the other hand, it leaves the trust administrators to the total discretion to which of these managers to pay,” the president indicated in the document.

Likewise, the second observation falls on article 172, paragraph II, numeral 17, which provides that the incentives contemplated in article 43 of the law will be applied to companies or managers already established with at least the last three fiscal periods previously.

“Said provision would imply that neither the managers established one or two fiscal periods before nor those that may be established after the entry into force of the law will not be able to benefit from these incentives, directly contradicting the principles of the general and non-electroactive scope of the law.”

Similarly, it recommended eliminating the provisions contained in numeral 8 and 17 of paragraph 11 of article 172, “to preserve the principles of legal security and non-retroactivity of the law, as well as to guarantee its general and equal application.”

On that occasion, other suggestions made by Medina were in article 2, paragraph, to make express reference to the regulations that regulate radioactive waste since these are excluded from the scope of the law now observed.

In article 4, dispense with the terms and definitions that are not used in the rest of the law, which is why they are unnecessary, among other recommendations.