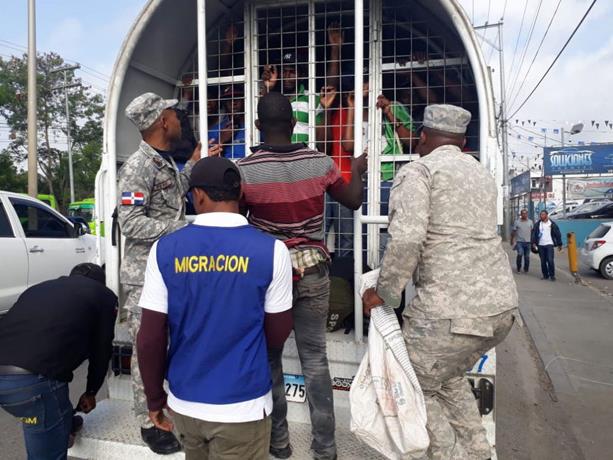 Several 161 Dominican personalities, including the top retired military and police commanders, have asked President Luis Abinader to “take urgent action in response to the massive movement of undocumented Haitians into the country,” supported by foreign and local resources.

In a motivated reflection on the case, which emphasizes the gravity of the problem, these figures warn the president that this situation produces “destabilizing effects” in all areas of national life.

They warn that this situation is “increasingly undermining the social and territorial cohesion” of the nation.

“It constitutes an undeniable fact before the country and the world, that (because of this situation) a harmful situation has been generated for the nation,” notes the message to the head of state.

Consequently, they add that this massive presence of illegal Haitians “creates fears and frictions in the population and makes us daily witnesses of bloody violence episodes.

There is also a resurgence of “old practices of impersonation of Dominicans by Haitians through bribes and other corrupt means.

This problem, they expose, “encourages the permanent claim of sectors of the Haitian leadership that our territory belongs to them and that they are merely recovering it, following a strategy of progressive occupation, which has gone from being peaceful and silent to being aggressive and defiant.

“The environment of polarization and confrontation between political and social forces that prevails in the neighboring state, taken advantage of by foreign and local actors with sinister purposes of disturbing peace and stability throughout the island and the Caribbean region, is highly dangerous,” the subscribers of the communication declare.

Furthermore, they add, “it constitutes a cause for alarm the great number of organized gangs that are receiving, from abroad, modern armaments, abundant ammunition, advanced communications equipment, and considerable economic resources that create destabilization in Haiti.”

Next, they call for reflection on the fact that these events carry “a high risk of creating the figure of the refugee, who is prevented from living in his own country and is ‘forced’ to take refuge in the Dominican Republic.

The civil and military authorities are urged to apply the Constitution and the laws to fulfill their mission of protecting the interests of the Republic “in a just and energetic manner,” while calling for “a great effort to overcome the traditional attitude of weakness, lack of coordination and dispersion.

They are based on the fact that today “it is more than predictable that shortly, given the accentuated economic and social deterioration that the impact of Covid-19 has generated in the country and the entire island, “relations between Dominicans and Haitians will become highly volatile and explosive.

It also considers “an unacceptable provocation,” and “a new and crude violation of national sovereignty and self-determination,” that during the anniversary of the 168/13 ruling of the Constitutional Court, the United Nations Agency for Refugees (UNHCR), “persists in its unnecessary campaign of confusing cases of non-documentation caused by the failure of the Haitian government to comply with its basic obligations to its citizens and its international duties, with a supposed practice of promoting statelessness attributed to the Dominican State.”

They also judged to be of “high citizen concern” that after the failure of the so-called Plan for Migratory Regularization sponsored by the past government, then-President Danilo Medina granted “graciously,” within the transition period, Dominican nationality to 750 Haitians, “based on irregular files, plagued by illegality and fraud.