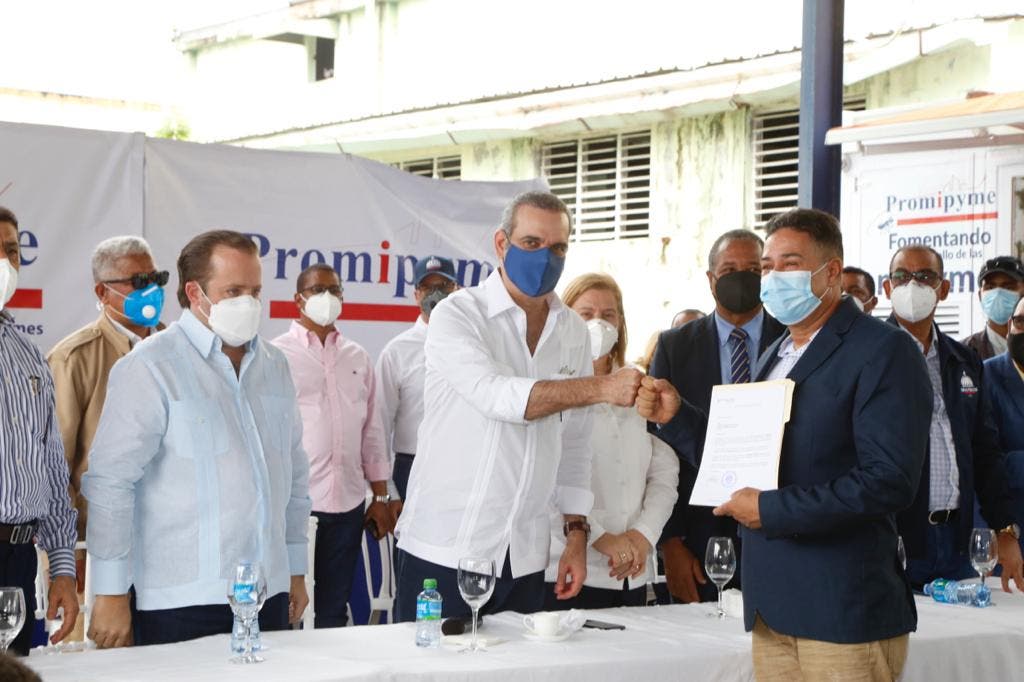 La Vega.- The President of the Republic, Luis Abinader, stated that he would double the funds granted to small and micro-entrepreneurs.

The President made the affirmations during the delivery of RD $ 3,344,000 in loans to 30 small entrepreneurs in this city through the National Council for the Promotion and Support of Micro, Small and Medium Enterprises (PORMIPYME), led by Porfirio Peralta.

Abinader stated that he has met on several occasions with the director of PROMIPYME, Porfirio Peralta, together with the Ministry of Industry and Commerce and the administrator of the Reserve Bank, because this government is going to support credit for MSMEs as a fundamental policy for the job creation and so that thousands of small and micro-entrepreneurs can emerge.

“That is what makes a country strong, when we have thousands of small agricultural entrepreneurs, in the commercial and industrial areas, in the area of ​​services, and that is the society that we are going to promote: that the Dominican Republic is a society of the micros and MSMEs, and for that, we are just beginning,” said the president.

After making the delivery, President Abinader said, “May this act serve simply to tell La Vega and the country that for MSMEs and micro credits, this is their government,” he concluded.

The first president thanked Vinicio Acevedo for the presence, who spoke on behalf of small and micro-entrepreneurs, an act that took place at the INESPRE premises.

Likewise, Ángel Matos Audén, deputy director of Management and Business Development of PROMIPYME, speaking on behalf of the director Porfirio Peralta, stated that in just one month they have already granted more than 10 million pesos to the MSMEs of this city so that These increase their productivity and contribute to the generation of jobs.

“It is a pleasure for us to reach you, and our objective is to promote the development of small and medium-sized companies throughout the national territory. Thank you, Mr. President, for the support you give us, and thanks to all of you for being with us in this activity,” concluded Ángel Matos.

In this management, PROMIPYME has delivered around 630 million pesos to more than 9 thousand companies throughout the national territory.