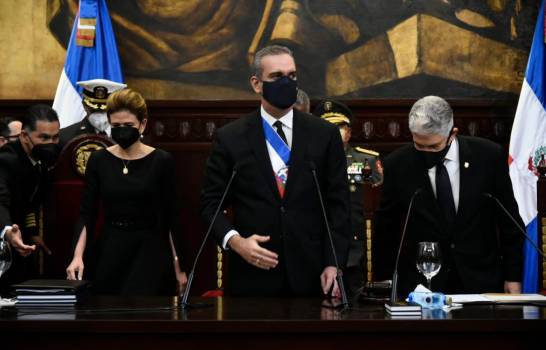 President Luis Abinader at the time he arrived at the National Assembly of the Republic. (EDDY VITTINI)

President Luis Abinader assured this Friday in his rendering of accounts that after six months in office, Dominicans should be confident that “the Dominican Republic has a better government,” that it has printed “a seal of transparency and ethics and has improved efficiency in public administration.”

At the same time, he assured that as president, he is up to the task.

The President expressed the difficulties he has faced and began as a health crisis that was expected to be of short duration and became a very different reality.

In this sense, he pointed out that his government has based itself on five pillars, which are facing the pandemic, shielding social protection, preparing ourselves for the launching of our economy, promoting a culture of transparency and honesty in the management of public funds, and undertaking the structural reforms of our country.

“The upheavals that this pandemic has generated in the economic system and social relations are unprecedented in this era characterized by global trade and the movement of people across borders,” said the President.

The severe effects of the pandemic have put our health care system and our economy to the test, forcing us to reorient our plans and all government action.