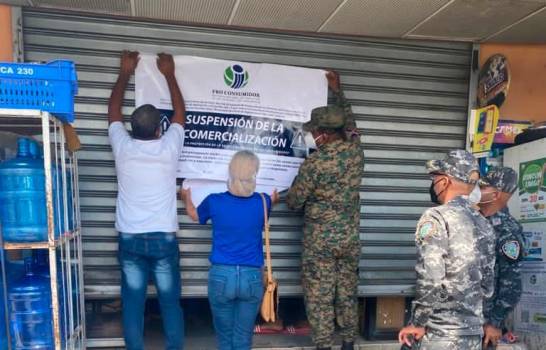 Image provided by Pro Consumidor of the closure of a commercial establishment. (EXTERNAL SOURCE)

The National Institute for the Protection of Consumer Rights (Pro Consumidor) reported that it proceeded to close thirteen shops in different parts of the country for selling alcoholic beverages that are considered adulterated, which were subjected to laboratory analysis and for operating under unacceptable conditions that put consumers’ health at risk.

Eddy Alcántara, head of the entity, reported that the businesses that were closed are located in Santiago, Santo Domingo Este, Bonao, Higüey, San Pedro de Macorís, San Cristóbal and others. None of the establishments were identified.

Alcántara explained that those businesses that sold beverages that are considered impure and those that sell products with expired dates, gnawed, with dirt, pests, and the presence of feces were closed during operations carried out by Pro Consumidor in those districts.

In addition to the closure of these businesses, the owners were fined five to ten times the minimum wage.

Among the closed establishments are three in Santiago, three in Santo Domingo Este, two in San Cristóbal, and one in each town mentioned above.

The official revealed that these businesses could not operate until they make the necessary improvements to stop the bad practices detected.

He affirmed that the sale of expired food products in inadequate conditions, as well as unsanitary commercial environments, are elements of care that occupy the attention of Pro Consumidor.”

On the other hand, the director of Pro Consumidor reported the destruction and incineration of 7,208 edible products that were seized after it was determined that they represented severe dangers to the health and safety of consumers.