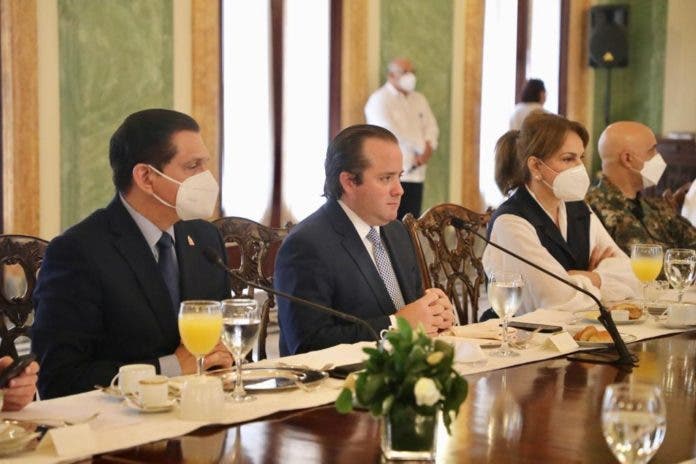 The Dominican Government declared this Tuesday the problem of the manufacture and commercialization of adulterated alcoholic beverages as a national security issue.

In a breakfast meeting with the press to inform about the lines of action, the Government, together with representatives of the business sector, asked for the collaboration of the media and the population, in general, to help with this problem to provide the best solutions for the benefit of all.

The meeting was attended by the Administrative Minister of the Presidency, José Ignacio Paliza; the Minister of Industry, Commerce and MiPymes, Víctor-Ito-Bisonó; the Minister of Public Health, Daniel Rivera; the Director of Communications and Government Spokesperson, Milagros Germán; the Director-General of Pro Consumidor, Eddy Alcántara; the President and Executive Vice-President of the Association of Industries of the Dominican Republic (AIRD), Celso Juan Marrazini and Circe Almánzar, respectively.

To deal with this situation, which has cost so many lives and pain to Dominican families, President Luis Abinader has instructed that extensive operations be carried out to remove adulterated beverages from the market and thus eradicate this criminal practice the country.

The Government also guarantees that it will work tirelessly to consume alcoholic beverages safe in the country and invites the population to join this great effort in the fight to eradicate this illegality.

The best way to do this is by not consuming alcoholic beverages of dubious origin, agreed to the meeting participants at the National Palace.

Likewise, intensification and coordination of operations in factories and stores throughout the country to control the commercialization of adulterated alcohol and the integration of a public-private alliance focused on the exchange of information.

During the meeting, the Administrative Minister of the Presidency, José Ignacio Paliza, announced that in the next few days, the President of the Republic, Luis Abinader, will issue a Decree of Regulations for the Application of Law 17-19 on the Eradication of this Illicit.

It was also announced that Pro Consumidor, together with the private sector, is working on an orientation campaign for the citizens to avoid the consumption of adulterated beverages and, in this way, will continue to carry out operations.

On the other hand, among the pertinent measures carried out by the Tourism Cabinet in the hotel sector, the revision of all the inventories and the processes of purchases in the country’s hotels stands out, where no case of this unfortunate problem has been reported yet.

To follow up on the issue, the Minister of Tourism, David Collado, will soon meet in the Eastern Region with all the tour operators.

During the month of April 2021, more than 80 deaths have been registered due to the consumption of beverages adulterated with methanol.

Official information from the Ministry of Public Health indicates that the ingestion of alcoholic beverages with methanol concentrations above 50% has been the fatal trigger.

The leading causes linked to the unfortunate deaths are the consumption of adulterated alcohol, clerene, and adulterated beverages that have been manufactured clandestinely, to which methanol has been added. To a lesser extent, there are adulterated and counterfeit beverages.

The Dominican alcoholic beverage industry is at the forefront of the region, producing and exporting recognized brands with world-class processes and controls and making constant investments to guarantee its products and consumer safety through additional security elements.

In Dominican rum, it is also an authentic country brand that we must protect because of what it means for development and exports.