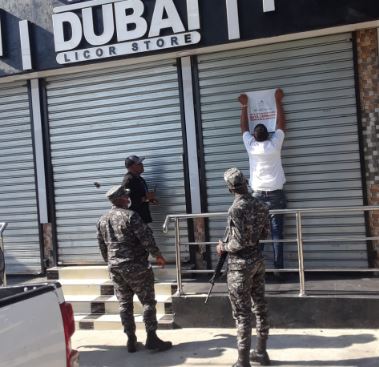 BARAHONA – Police agents accompanied by authorities of the Alcoholic Beverages Control Program (COBA) closed a liquor business where last Sunday night, a woman was shot, and its owner was arrested.

The closed establishment is “Drinks Dubai,” owned by Mr. Luis Antonio Carrasco, alias Esmeli, located on the old road in the area of the boardwalk of the municipality of La Cienaga, on the coast of this province.

Last Sunday night Arelis Calderon, alias La Boli, about 24 years old, was wounded with a gunshot wound in the right leg, in the framework of a fight with bottles between two other women who were drinking alcoholic beverages in the business mentioned above, as it is customary every weekend.

According to reports, a running race ensued during the incident during which an unknown person fired a shot that hit La Boli in the right leg, causing her to be hospitalized in a health center in the city.

The Southern Regional Directorate of the Police informed that Luis Antonio Carrasco was placed under the control of the Public Prosecutor’s Office for the corresponding purposes.

In recent times, in the centers of alcoholic beverages vending, located in the area of the Malecon of La Cienaga, there have been several incidents in which some people have died, and firearms and knives have injured others.