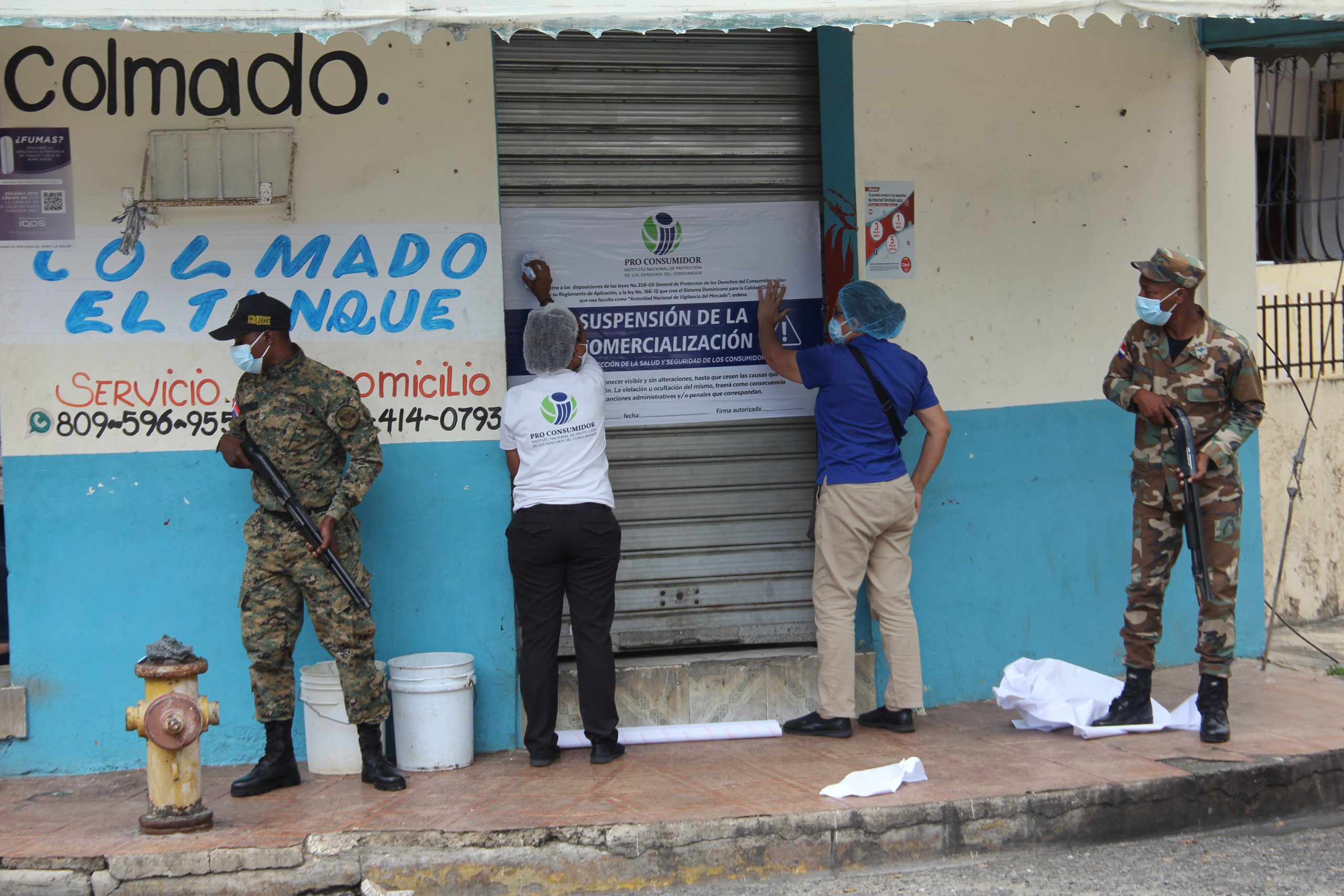 The National Institute for the Protection of Consumer Rights (Pro Consumidor) closed again this Wednesday two grocery stores in the Juan Pablo Duarte sector of this municipality, which had been closed last April for allegedly selling adulterated alcoholic beverages that caused the death of several people, and reopened their commercial activities without the authorization of the entity.

The executive director of Pro Consumidor, Dr. Eddy Alcántara, said that as soon as this institution was informed that the El Tanque and Elianny grocery stores, located in the referred sector, were opened by their owners in disregard of the measure taken by this entity last April 19, it proceeded again to the immediate closing of both establishments.

Alcántara recalled that on that date, Inspection Act No.1019-2021 was issued, whose main findings were “the sale of alcoholic beverages presumably adulterated, which caused the death of several people.”

He said that this decision was taken under articles 24 and 117 of Law No.358-05 and its implementing regulations approved by decree number 236-08, “proceeding informally to inspect to verify the quality, safety, and hygiene in the facilities of these establishments, the first, Colmado el Tanque, located on Calle 15 corner Calle 8, and the second, Colmado Elianny, on Calle Ramón E. Hierro Santos corner Calle 8, of the preferred sector of the municipality of Santo Domingo East.

He said that after the findings, they proceeded to place the posters of suspension of commercialization in these establishments “for selling presumably adulterated alcoholic beverages.”

The official explained that the institution, through a resolution issued today, reiterated “as a precautionary measure the immediate suspension of the commercial activities of these commercial establishments until the Attorney General’s Office of the Republic concludes with the investigation which was taken over by this institute as a result of the deaths of several people due to the ingestion of adulterated alcoholic beverages.”

The director of Pro Consumidor warned the owners of both grocery stores that given the circumstances and if the violation of the legal provisions is proven, “an administrative sanctioning procedure could be initiated against them for violating the provisions of Law No. 358-05 to the detriment of the national consumer population”.

Deaths due to the ingestion of adulterated Alcohol

It is recalled that seven friends between the ages of 40 and 64 died in mid-April in the Juan Pablo Duarte sector of the municipality of Santo Domingo East after consuming adulterated alcoholic beverages, which they had supposedly bought in the El Tanque and Elianny grocery stores.

Among the deceased are Jorge Radhamés Beras, 57; Luis Corniell and Rafael Emilio Bartolomé, both 63; and Fernando Adonis Ferreras and Julio César Montilla, both 52.