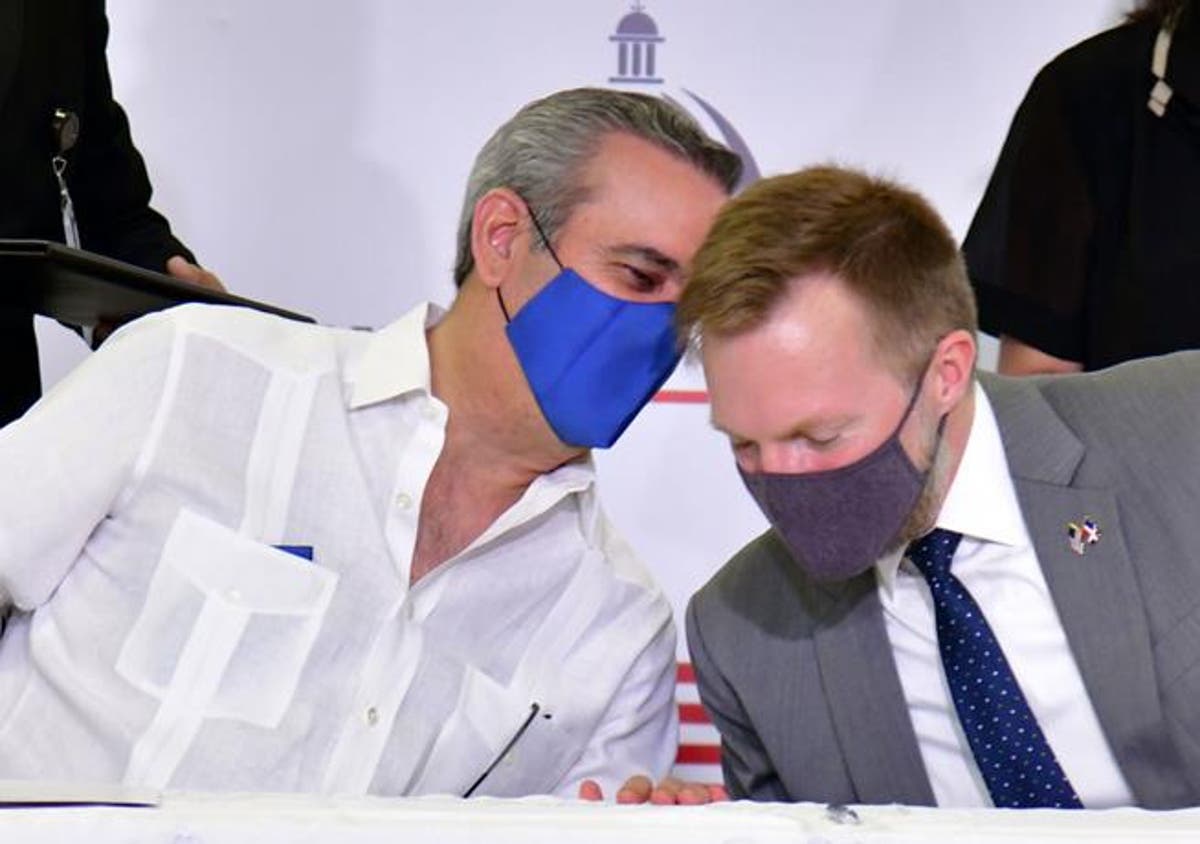 President Luis Abinader talks at his discretion with Robert Thomas during the ceremony.

Robert Thomas praised Abinader “for his leadership and continued commitment to deepening the relationship between our nations.”

The Dominican Republic stands out in 2021 as the Latin American country that improved the most in the Capacity to Fight Corruption Index (CCC), going from 13th to 10th place.

This year the country obtained an overall score of 4.38 and in 2020 3.26. The legal capacity indicator obtained 4.21; in Democracy and Political Institutions 4.11 and Civil Society and Media 5.57.

Yesterday, President Luis Abinader again warned that his government would not tolerate acts of corruption, whether committed during his administration or his administration. Furthermore, he assured that the authorities remain “vigilant” in the way public funds are invested.

“The Government does not and will not tolerate any act of corruption by this or the last administration, and we are vigilant every day so that the funds paid by each citizen are invested in the right way to solve people’s problems and improve their quality of life. We are working on transparency mechanisms,” the head of state said.

Abinader spoke during the signing of a bilateral agreement with the U.S. Embassy in the country for an amount of $251 million that sets in motion the cooperation strategy of the next five years of the Agency for International Development (USAID) country. The agreement came just a day after a State Department report was released in the country, indicating investor complaints about the Dominican Republic as a destination, with the main accusations being “widespread corruption” with requests for bribes and that they affect foreign investments in Dominican lands.

Robert Thomas speaks
The charge d’affaires of the Embassy, Robert Thomas, said that from 1962 to date, the United States, through USAID, has allocated $1,800 million for development projects in the Dominican Republic.

“We do not support in exchange for concessions. There are no ties in our support we provide assistance to the Dominican Republic because we believe we are safer when our friends are safe. We thrive when they thrive,” Thomas added as he spoke at the event.

The signing of the agreement was made at the Pediatric Foundation for a Tomorrow. This organization has improved the lives of 1,700 young mothers with USAid funds, many of them victims of gender violence, early marriage, and teenage pregnancy, by providing them with psychosocial support, educational opportunities, and vocational training necessary to be empowered agents of change.

Cooperation
Quality of life
The Minister of Economy, Planning,[ and Development, Miguel Ceara Hatton, said that the government’s actions seek to improve the quality of life of the people.

Regarding the signing of the agreement, he said that it “reaffirms the commitment of both governments to continue fostering ties of friendship and cooperation that allow the development of initiatives of national interest.”