Government bans use of beaches, rivers and swimming pools until Tuesday 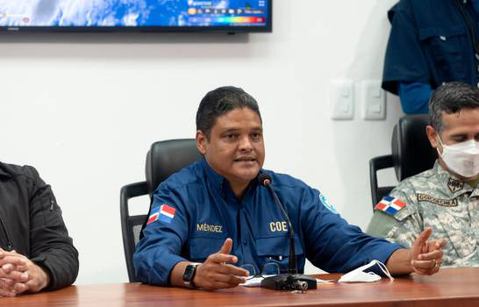 The director of the COE, General Juan Manuel Mendez, while leading the press conference in which the measures were reported. (PHOTO: DIARIO LIBRE/JOSÉ ALEXANDER ARIAS)

On Sunday, the Emergency Operations Center (COE) announced a series of measures adopted by the Government to prevent and address the possible effects of the passage through the country of Tropical Depression Grace.

Among the provisions is the prohibition of the use of beaches, rivers, and surrounding areas from 5:00 pm this Sunday until 6:00 pm on Tuesday.

The measure is contained in resolution DJ-024721 of the Ministry of Tourism, which also prohibits in the same period activities in open areas, adventure tourism, and maritime transport, use of swimming pools during the grace passage.

Regarding hotels, it establishes that they must limit their services in restaurants located outdoors and take precautionary measures and follow up on the bulletins and guidelines of civil protection institutions.

While the Ministry of Labor, through its resolution 22/21, instructed employers of companies located in areas declared under red alert by the COE to relax their working hours, suspend non-essential commercial activities until the level of alert in their locality is degraded, and take the necessary measures to safeguard the safety and physical integrity of their employees.

The Civil Defense reported that in the Capotillo widening, in the National District, 16 people are housed in schools and 10 in the Ozama widening, in Santo Domingo Este. At the same time, in the province of San Juan, there are people displaced to the homes of relatives.

The Dams and Reservoirs Operation Committee reported that the Las Barías Counterembalse is being regulated, discharging 243 cubic meters per second to bring it to level 245 and contemplate dumping in the Savannah Yegua Dam so that they have storage capacity before the rains that are expected. Meanwhile, they are being dumped in the Hatillo and Rincon dams.

The Emergency Operations Center (COE) ratified the red alert for 20 provinces and yellow for 11 provinces, even though Tropical Storm Grace was downgraded to a tropical depression.

The National Bureau of Meteorology (Onamet) said that Grace is located 300 kilometers east-southeast of Santo Domingo this Sunday, with maximum sustained winds of 55 kilometers per hour and moving west at 24 kilometers per hour. He explained that if this trajectory continues, he would be entering Dominican territory this Monday morning or afternoon, although, from tonight, there will be downpours towards the eastern part of the country.

The director of the Emergency Operations Center (COE), General Juan Manuel Mendez, called on the population not to be careless with the phenomenon because of the rainfall it brings with it, a situation that he says is aggravated by the saturation of the soils left by the rains of recent days.

For its part, the Dominican Municipal League reported that it is in communication with all the country’s mayors in case of any eventuality.

Likewise, the National Institute of Transit and Transport (Intrant) said it would be taking measures at toll stations to ensure the return of those who traveled over the long weekend, especially to the eastern part of the country.

Part of these measures was adopted during a meeting of the National Emergency Committee with President Luis Abinader at the National Palace on Sunday afternoon.

A total of 27 state institutions are working on preparations to prevent and address the possible effects of Grace, coordinated by the COE and those that have taken particular measures.