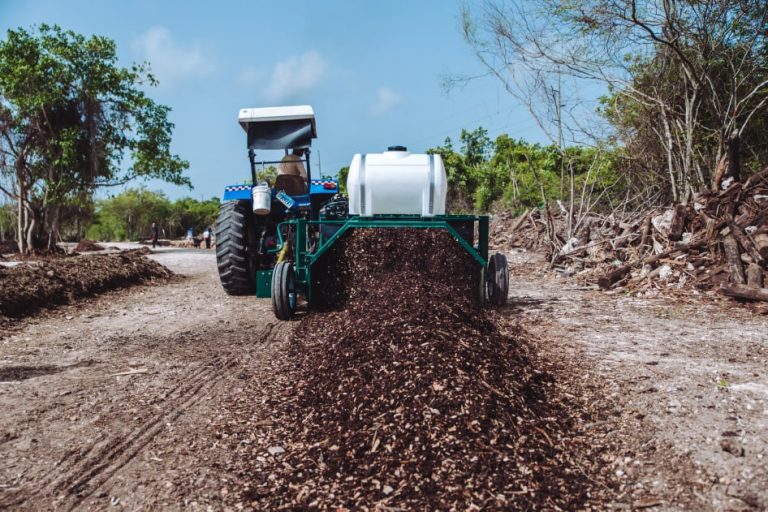 ALGEANOVA IN ALLIANCE WITH THE PUNTA CANA GROUP FOUNDATION

As a result of the economic and social problems represented for the tourism sector by the voluminous arrival and accumulation of sargassum on the Dominican coasts, the company AlgeaNova, which is dedicated to the application of marine technologies to combat the invasion of sargassum, installed the first multipurpose plant for the transformation, use, and valorization of sargassum in the country.

“The sea has an unexplored potential and opens a horizon for the emergence of a new industrial sector around the use and valorization of sargassum that reaches the coasts of our country in strict respect for environmental treaties,” said Manolo Despradel, general manager of AlgeaNova.

Since 2011, the Caribbean and the Gulf of Mexico have seen a significant increase in the accumulation of sargassum on the coasts due, among other causes, to global warming, deforestation, and the excessive use of chemical fertilizers, a perfect combination for the growth of this algae.

“When decomposing on the beach, sargassum produces a putrid smell, which can cause allergies and respiratory problems to those who come into contact with it; not to mention the damage it causes to the various coastal ecosystems, which is why it is so important to prevent it from reaching the beaches,” he emphasized.

The technologies implemented by AlgeaNova consist of the placement of floating barriers to retain sargassum in the sea; the collection of live and fresh sargassum behind the barriers to prevent it from reaching the beaches.

After a floating barrier is installed, a large amount of sargassum accumulates behind it; at that time, sargassum harvesting barges are used to remove it and take it ashore, where it is harvested. Precisely, for its prototype barge, AlgeaNova received the Applied Technology Award from the National Intellectual Property Office (ONAPI).

“The collection of sargassum before it lands on the beaches becomes an ecological and economic necessity of the first order. For this reason, we have made alliances with international companies interested in the use of sargassum,” said Frederick González, sales manager of AlgeaNova.

The multipurpose facility can convert sargassum into high-quality organic compost that reconditions agricultural soils and stimulates crop growth, replacing petrochemicals and reducing the CO2 that is released into the atmosphere.

Also, disposable and compostable dishes are manufactured, which replace plastic and foam, and biogas to use in the production of electrical energy and replace hydrocarbons, according to a statement.

“Our organic compost has been achieved through an alliance with the Canadian biotechnology company ‘Grogenics,’ supported by the University of Montreal and the Punta Cana Group Foundation, who collaborated with us to develop organic compost from sargassum, which has 60% sargassum and has become a tool with a high social impact. But, the most ambitious thing is to extract methane from the decomposition of sargassum and then clean it to convert it into electrical energy,” González said.

“Our barriers have unparalleled advantages: their anchoring system, their weight, their volume, the ease of disassembly at sea, storage on land and putting in place, make it a reliable and effective product. We are the only ones who can propose to uninstall and store several kilometers of barrier, with just 3 or 4 days of warning of an imminent hurricane, using only a small group of technicians,” he concluded.