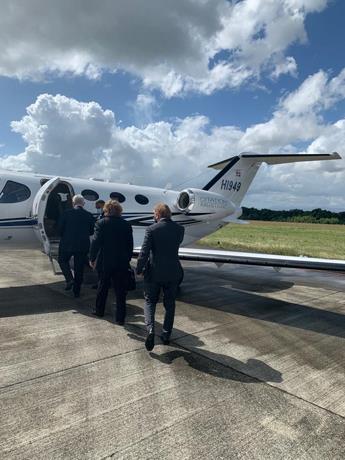 The commission was headed by Wally Brewster, former United States ambassador to the Dominican Republic.

A delegation of US officials traveled to Haiti to meet with the Prime Minister of Haiti before releasing the 12 US missionaries kidnapped by an armed gang from Haiti.

The commission was headed by James “Wally” Brewster, a former US ambassador to the Dominican Republic, who traveled to Port-au-Prince from El Higuero aboard a Helidosa Aviation Group plane.

The meeting held to discuss the release of US hostages kidnapped by the Haitian armed gang “400 Mawozo” was held before their release.

The captors were asking for the sum of one million dollars per head and, according to the Center for Analysis of Human Rights Research (CARDH), had demanded the release of one of their leaders, who is serving a sentence in the Haitian National Penitentiary.

Yesterday, Thursday, it was informed that the 12 members who were still kidnapped were released after negotiations with US officials.

The missionaries were kidnapped in the Croix-des-Bouquets area, a slum on the outskirts of Port-au-Prince, when they were returning home by bus after visiting an orphanage in the Ganthier area, near the Haitian capital.

The kidnapped group originally consisted of 17 people, 16 Americans and a Canadian, including the missionaries and five children, their relatives.

So you telling me the US is now making deals with kidnappers? This is a joke they (inappropriate word eliminated) can’t even count to 100 now they have millions of dollars! Hopefully they put a plan together to pay and follow intel to make sure they never get to spend the money! Ridiculous!!

Money has s serial code, they will know who ended up with the money😉🤫