Low contagion curve after weeks on the rise

Active cases of the virus stand at 19,609 cases, which is a significant reduction this week.

After around six weeks of systematic increase, the indicators of infections, incidence, new cases, and positivity generated by the fifth wave of Covid-19 have begun to decrease in the country.

However, the risk of contracting the virus is still very high since the omicron variant predominates at the national level. According to reports from health authorities, each infected person can transmit the virus to more than six.

Compared to last week, the epidemiological surveillance of the virus registers a reduction in the detection of new cases, a slight but constant reduction in four-week positivity, placing it below 30%, and the seven-day incidence per 100,000 inhabitants is halved in most provinces.

Likewise, the transmission rate, which last week was above eight, that is to say, that each infected person could transmit the virus to eight more people, yesterday was at 6.42, the omicron variant being the one that continues to predominate in the country, but still, there is some delta circulation.

Plateau phase
The behavior of the indicators compared to previous weeks is changing the growth curve, which was previously totally vertical, so it is likely that the country is beginning the plateau phase or the decrease in cases, explained the director of National Epidemiology, Ronald Skewes.

He said that the four-week positivity had been declining for several days. Hospital occupancy, especially regular beds, showed a slight increase in intensive care, but without causing stress to the system.

He highlighted that the system could withstand the onslaught of the omicron wave with great diagnostic response capacity and revealed that 112,280 laboratory samples were processed in one week in the public and private sectors.

He explained that although most provinces have lowered their incidence, some still keep it high, as is the case of Espaillat, Dajabón, Bahoruco, and the National District. 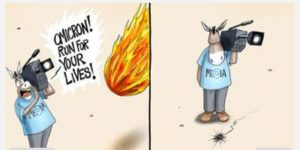