Consumers and sellers complain about increases for basic necessities 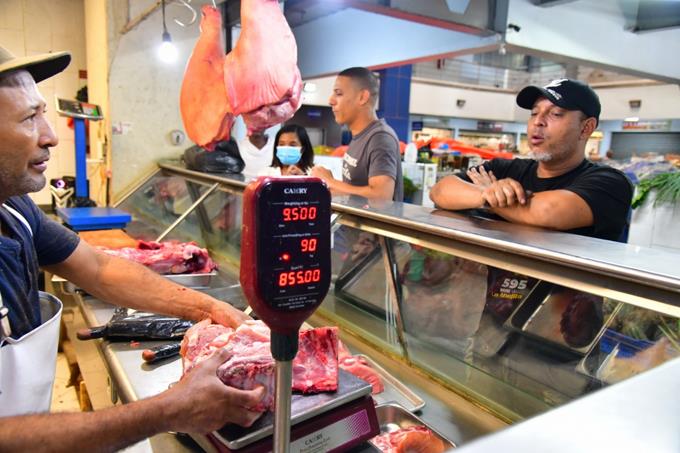 In a tour of different markets in the country’s capital, there is a general complaint among citizens, who say they do not know what they will do if the cost of living continues to rise disproportionately.

From blaming “Ito Bisonó,” the “Government of Change,” “the fuels,” and “the foreign debt,” shoppers, heads of families, single mothers, and household providers are looking for a culprit for their economic hardships, as some even feel that the little sustenance they have to survive is buying less and less every day as prices rise while their income remains fixed.

Walking through the doors of the Villa Consuelo Market, the atmosphere reflected the same criticism of the consumers. Don Demetrio Ruíz narrated his daily life in the facilities of this market, where he has been living for 20 years offering products to the locals, “There are things that have become scarce, people are buying less, but this is biblical, things will go from bad to worse,” he added.

Just as Desiderio was explaining his situation to a team from this newspaper, one of his regular customers, Ana, complained about the high price of auyama (squash), “but Ruiz said that that little piece of auyama is 15 pesos! “to which Desiderio only said, “everything has gone up.”

Juan Perez, who owns the spice store “La Plazita” and has been an entrepreneur for two years, told how the price hike affects his daily sales.

“There are differences in how people used to buy compared to how they buy now, people want detailed products and the truth is that as things are, one must sell by the packet or pounds depending on how to make the chelitos,” said Perez.

In the butcher’s shop, Dani Chacón feels the increases in two ways, since he is a consumer and has a fast-food business called Chacón Chef, which is located in the vicinity of the sector.

Chacón said that “if the fuels continue to rise, it will be hard for me to sell the bus, I am a father of three children, and I survive because I have my business, every time something goes up, I have to change something to my prices. I thank God because I have a place to live, I can’t imagine how those who have nothing are doing.”

Among a dozen beautiful roses, pompons, carnations, and other species of local flora, Marta Lopez, in her flower stand, where she has been working since 2000, explains that she sells a product that constantly goes up and down. “I never thought that from buying a package of flowers at 50 pesos, now if it is not with 500 or a chin more, there is no sale,” declared Marta.

Even those involved in the magic trade have expressed their feelings about the current situation in the country. For example, in the San Miguel botanical shop, Jose Mendez, who has had a family business for 40 years, which has been passed from generation to generation, expressed his opinion: “My daughter and what you are seeing and living, everything is expensive, I used to buy ammonia for 150 pesos, and that same size is 450 pesos, as days go by this is “scary.”