Trinidadian Alikate, from Discovery case, was head of a prison in the US and dedicated himself to music in the Dominican Republic 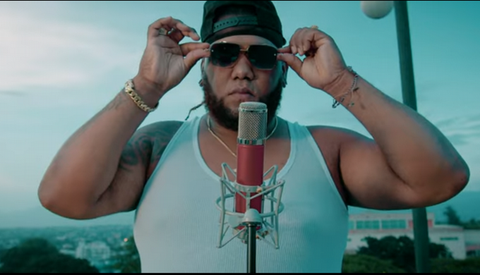 A tricolor rosary (white, blue, and red) hung around his neck, a Dominican Republic flag in the background, two speakers, a piano, two glasses of alcohol, which were emptied and filled throughout the more than an hour that the interview lasted, was the setting chosen by Ángel Rafael Peralta Guzmán (Alikate), and his interviewer, known as Navaja in the Los Trinitarios group, to tell how they live in that world.

Pointed out by the Public Ministry as one of those involved in the Discovery case, “ALIKATE BIG 3BU,” as he calls himself artistically, was born in Beijing, Santiago. The 3BU is (Tri Bu) for Los Trinitarios.

At almost 13 years old, in 1999, he went to live in the United States, after his mother married a person born in Puerto Rico. His wishes were to study to become a pilot.

Living in North America and being a teenager over six feet tall, despite his young age, he stabbed another teen several times, he said, due to the impotence of being rejected by the other children. A person known as Doggi introduced him to Los Trinitarios; after seeing the “courage,” he developed. This group sought to defend the “legacy of Duarte, Sánchez, and Mella” and thus protect other Dominicans abused by Puerto Ricans and Americans.

As he narrated, the ideology of Los Trinitarios is to fight against abuse and defend the country, even though others “have gone astray.”

While in Los Trinitarios, he entered the world of drug trafficking, selling drugs in Manhattan and Brooklyn.

He explained that the first time he was imprisoned, he was defending a friend. He had a knife fight with another young man, who fell into a coma. He pleads guilty and is sentenced to five years in prison, because, as he explained, “they put some deaths on him.”

During his time in prison, he managed to be one of the first Trinidadians to become head of a prison in the US. However,afterr nearly six years in detention, a sentence that increased due to conflicts in the prison, he was deported to the Dominican Republic.

He arrived in the country with the intention of not looking for or having problems, but other friends reintroduced him into the world of Los Trinitarios to continue “defending Dominicans.”

For him, being Trinitarian has been worth it regardless of all the things he has experienced.

“Being a Trinitarian is preparing to fight a fight… It is an honor, it is a privilege to be a Trinitarian, because every punch, every stab that they have given me, I shoot, because they have given me a shot, it is also an honor because I have always been for the right side, I have never supported the robbery,” he assures that a thief is like a rat.

In the Dominican Republic, the authorities condemned him again for a murder, which he says he did not commit, and he was taken to the La Vega prison, where he introduced other young people to Los Trinitarios.

Also because of problems he had in this prison, he was transferred to the Cotuí prison. As he explained, seeing the fear they had of him, he decided that he did not want “that for his life.”

Although the interview does not specify when he left prison and came to music, Ángel Rafael Peralta Guzmán says that in his songs he represents Los Trinitarios.

His YouTube page has 78,400 subscribers. More than two weeks ago he presented his latest production before being arrested by the authorities, for his alleged involvement in the network dedicated to cybercrime. The theme is called “Street Code.”

His 30 videos have led him to be on different music platforms and have 103,000 followers on Instagram.

Accusation of Operation Discovery
In the coercive measure request file, the Public Ministry assures that Ángel Rafael Peralta Guzmán is a de facto partner in the call center of the accused Mayobanex Braulio Rafael Rodríguez Fernández where he recruits people to carry out mirror transfers of illicit money from the United States of America.

They say that he uses urban music acting as a “dembow” singer to give the appearance of legality to the goods that he has acquired and exhibits; he relates to people from the urban art environment and communication (radio and television).

They indicate that they traffic firearms illegally.

He says that he owns a villa with a commercial name VillaHipolita, an apartment, a 2014 jeep through the illicit activities.

“The accused Ángel Rafael Peralta Guzmán (a) Alikate, received salaries via the United Nearshore Operations company, in the period 2008 for RD$1,023.18. However, he is a frequent beneficiary of remittances, which amount to RD$36,685.40 and USD$22,012.87, coming in its entirety from the United States,” says the Public Ministry.