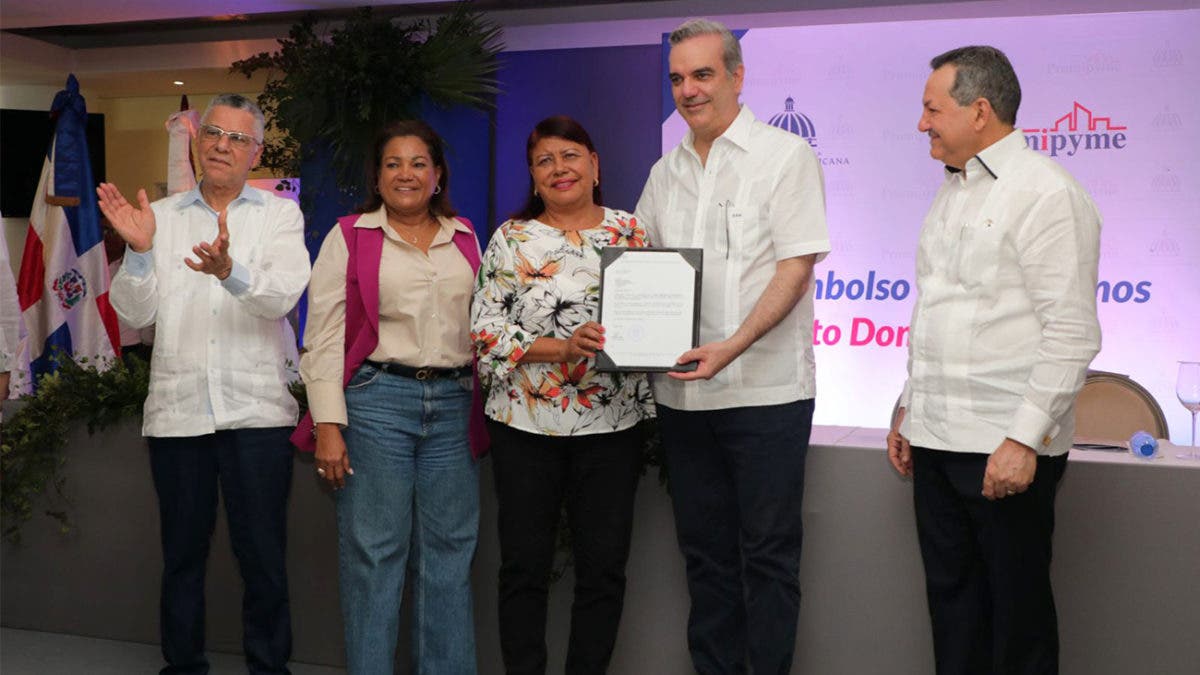 Yesterday President Luis Abinader led the ceremony for the delivery of RD$92 million in loans and financing to 750 beneficiaries through the National Council for the Promotion and Support of Micro, Small and Medium Enterprises (PROMIPYME).

At the ceremony, held at the Santo Domingo East City Hall headquarters, PROMIPYME director Porfirio Peralta emphasized that MSMEs constitute the essential support of the Dominican economy because they represent the Dominican economy’s leading sources of employment and wealth generation in the country.

“We are teaching people to fish instead of giving fish.” In addition, he said that the MSMEs are coated with a significant social and economic contribution that underpins the integral development of the country’s regions, provinces, and municipalities.

Peralta informed that with these resources delivered to the men and women of the province of Santo Domingo, the aim is to promote their small and medium enterprises.

More than 15,000 families benefited.
Earlier, President Abinader launched the National Plan Construyendo Esperanza (Building Hope) to renovate and reconstruct alleys on the eastern bank of the Ozama River, which will benefit more than 15 thousand families.

This work will provide dignified steps so that the communities of El Dique in Santo Domingo East can move around safely.

In the reconstruction of this area, 250 linear meters of alleys and stairs will be repaired.

This plan is an initiative of the Presidential Commission for the Support of Neighborhood Development, presided over by Rolfi Rojas, which seeks to beautify and condition the common areas of the different sectors of the eastern bank of the Ozama River.

These include children’s areas, sports facilities, steps, and accesses, which will be rebuilt in response to requests from the community.

At the event, the Head of State assured that the Government is working to make every citizen aware of the Government’s aid institutions and, at the same time to improve the quality of life.

With this program, the Government reaches the heart of the neighborhoods, people with scarce resources and living in extreme poverty.

Also, the Ministry of Labor, the National Institute for the Integration of Early Childhood Care (INAIPI), INFOTEP, the Vocational Schools of the Armed Forces and the National Police, the Community Youth Police, the Central Electoral Board, and the Technological Institute of the Americas (ITLA).

The institutions join forces to benefit the population by helping to improve people’s health and, at the same time, guaranteeing a technical education so that they have better sources of employment.

In addition, surveys were made of people who qualify for the Supérate card and require technical training to be placed in the labor market.

The activities were accompanied by the senator of Santo Domingo province, Antonio Taveras; the governor, Julia Drullard; the mayor of Santo Domingo East, Manuel Jiménez; the vice-minister of Social and Community Management, Juan Garrigó; the deputy Bertico Santana and the director of Passports, Nestor Julio Cruz Pichardo.

Loans are helpful. Yet, it would be more helpful if the government gave these businesses stimulus funds, not loans. Doing this would take the burden off the businesses to pay back loans. It would allow them to grow, prosper, and the government would eventually get back the funds through taxes. It is a win win situation.

Correct, but Dominican politics only have loans in their small brains