“Four more years,” the slogan that awaited Abinader in some places of his tour this Saturday 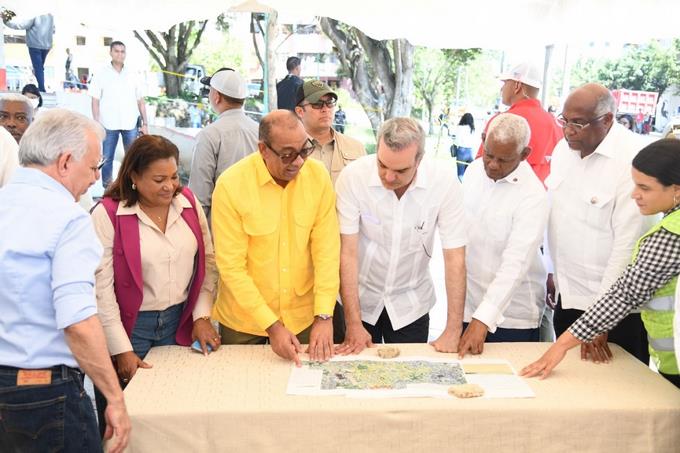 On his tour this Saturday through the Santo Domingo Este municipality, President Luis Abinader enjoyed the sympathy of his citizens, who in some places shouted, “Four more years.”

When making a supervisory visit to the Los Mina economic dining room facilities, hundreds of people waiting to receive a ration of cooked food applauded the president and urged him to seek reelection in office.

The president visited the Los Mina producers’ market early, supervised the sale of agricultural goods, and spoke with vendors and people who bought in this market located on Venezuela Avenue, in the Los Mina sector.

When speaking with journalists covering the tour, Abinader referred to the international situation that affects the prices of products in the basic basket and the rejection of the proposal to eliminate tariffs by law on 67 mass consumption products.

“Let’s not politicize these things, they can oppose it, it’s normal for them to oppose it, but they shouldn’t oppose the people eating cheaper. And what we are doing is taking measures so that the people eat more cheaply,” the president said. Also, he pointed out that the Government is taking the necessary measures to protect the most vulnerable families.

“What we are doing is what many people need, we are going to mitigate price increases through Inespre so that people can buy products at low prices,” Abinader pointed out.

The Head of State took advantage of this moment to call the Dominican population to be prudent before the Holy Week holiday. “You can rest, but always do it with prudence, always do your activities without excesses and spend it with your loved ones, the family, but always with prudence,” said the president.

He called on the youth to have no limits.
As he inaugurated the first Science and Technology Fair in East Santo Domingo, Abinader called on young people to develop their capacities “without limits” and count on the Government’s support to achieve their goals.

“The message that I want to leave here is that you can develop any innovation, any project without limits. Do not set limits in your minds (…) you can go wherever you want,” emphasized the president in his speech before hundreds of students from the Nuestra Señora de la Altagracia Polytechnic in Villa Duarte.

RD$92 million in loans
In an accelerated race to fulfill the 11 activities on the agenda, President Abinader moved to the La Fuente de Los Tres Brazos neighborhood to participate in the ‘First You’ Inclusion Day organized by Proyectos Estratégicos y Specials of the Presidency (PROPEEP).

A few minutes later, the president arrived at the headquarters of the Santo Domingo Este City Hall (SDE) to deliver loan certificates and two engines to a representation of the 720 beneficiaries of RD$92 million in financing granted by the National Council for Promotion and Support. to the Micro, Small and Medium Enterprises (Promipyme).

Closeness to the people
In each activity in which the president participated this Saturday, his interest in being close to the people waiting for him prevailed, whom he dismounted to greet, photographed himself, took selfies, and listened to carefully.