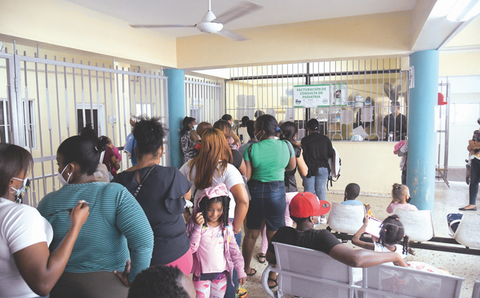 Santo Domingo, DR
For Dr. Nelson Rodríguez Monegro, former director of the National Health Service (SNS), the denunciation made by his current incumbent, Dr. Mario Lama of “enramados” or “businesses” in and around hospitals, is a reality that has been going on for many, many years against which he fought and was unable to eradicate.

“Dr. Mario Lama is very right and it saddens me that we still have not made progress on that, despite the fact that we fought hard to eradicate that practice, I empowered people to investigate specific cases, but nothing concrete was reached because there is a huge web of complicity in that and that is the reality,” said the former director of the SNS, a post he resigned from in 2018.

Rodríguez Monegro pointed out that “it is true that equipment is stolen in hospitals, that equipment is damaged and that hospital staff receive 30% for referring patients from hospitals to these centers, that is to say, that all these things have become a web of corruption, a totally criminal web, which we have been denouncing for many years,” he emphasized.

To fight it
In Rodríguez Monegro’s opinion, the way to combat these conflicts of interest is for the hospitals to have all the equipment and services in the best conditions and for there to be rigor, because it is not possible to have people working in the hospital who have health establishments that compete with the public center.

He also believes it is essential to increase the rigor of supervision and vigilance to detect this type of conflict of interest.

The origin of everything
Referring to the origin of this old practice, the former official, who has held different positions in the country’s state healthcare field, explains that it arose as a consequence of the precariousness of many hospitals in terms of laboratories, blood banks, deficiencies in X-ray and sonography equipment, among others, which led to the proliferation of a series of private services in hospital environments.

From there, he added, we will find laboratories, blood banks, sonography centers, and other diagnostic methods that emerge as alternatives to the deficiencies of the hospitals. What happens, he wondered, and answered that many of these businesses have links with people who work in the hospitals and that is where the conflict of interest begins.

A case he does not forget
He recalled that when he directed the Toribio Bencosme hospital in Moca, he came across a doctor who sent all the clinical analyses that he did on the patients who went to the hospital to a private laboratory, despite the fact that the hospital laboratory was in better condition.

He said that since he detected this, he took the doctor to get to know the hospital laboratory well, and later they went together to visit the private clinical laboratory in question, and at the end, he asked the doctor which of the two had the better bioanalysis center, and when he answered that it was the public center, he asked him the question of the reasons for which he referred the patients.

The former director of the SNS said that the reason for these referrals was that the private center gave him 30% of the payments for services rendered by the patients that the physician referred to him.

He pointed out that there have also been cases of a staff member dropping one of the parts of the sonograph so that it would be damaged. “There are 10,000 ways of how to affect and damage a piece of equipment, which taxes those hospitals,” he noted.

LEARN MORE
A great struggle
He said that at the time, when he occupied the direction of the SNS, he had a great struggle to curb these practices and that even when he tendered equipment, he also tendered the service so that whoever won it would ensure the training of the human resource on the use of the equipment and also ensure the maintenance of this equipment.

He explained that sometimes very sophisticated equipment is found in hospitals that are damaged because it is not used, because they do not know how to use it, and the training of human resources and preventive treatment must be ensured so that it can be repaired if it is damaged.

He recalled that in very remote times one could find private clinics that were equipped with hospital supplies, including surgical instruments, about which, he said, one must always be very vigilant because there are very expensive forceps that can disappear and he recalled cases where complete equipment was lost.

Hospitals and clinics, you pat my back I will pat your back. Expect more of these schemes to be developed.

The government has a new law preventing hospitals/clinics to demand a down payment before treatment. Once this is paid it is difficult for the patient to recover if true costs of treatment are less than the down payment. Suspect part of the payment is used for kickbacks and thus is unrecoverable.

This new law is the catalyst for the medical facilities, doctors, to look for new devices to reach into the pockets of patients.