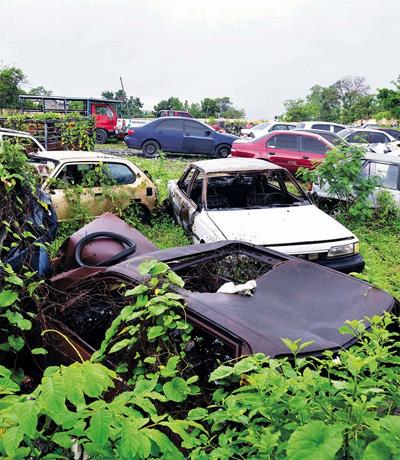 The El Coco greyhound track where they retain vehicles. ARCHIVE

The transit authorities would avoid many conflicts with drivers if they instructed the agents who are on the streets to comply with the law, with the sentences of the judges and with the jurisprudence of the Judicial Branch and the Constitutional Court.

They did not have centers full of vehicles, they did not have friction with the owners, nor did they allow the vehicles to deteriorate, and turn into scrap metal, by putting obstacles in their way when they claim their return. Complaints in this regard have rained for years.

Sometimes they are seen to be stalking drivers in their eagerness to impose a penalty, rather than to prevent violations. Sometimes, citizens get upset when they consider that they have not committed any fault, leading to violent incidents. The work should be preventive, instead of repressive, which is why it is essential that traffic agents be trained and guided for this purpose, and that they adjust their actions to the legal regime. The conflicts between drivers and traffic police over the retention of vehicles come from afar. Drivers have had to exhaust the judicial channels, and even so it is a practice that has not been overcome, even incurring violations of fundamental rights.

Now, an incident with attacks and abuses against the authorities of the Ombudsman and reporters had to occur at the El Coco greyhound track on April 11, for the authorities to begin to realize that they must adopt measures to put an end to this practice. After that mishap, the Ministry of the Interior and Police, the General Directorate of Land Traffic (Digesett) and representatives of other public entities met with the Ombudsman, Pablo Ulloa, with the purpose of preparing a project to solve the inconveniences generated for the irregular retention of vehicles.

In 2015, the Constitutional Court issued judgment TC-021-15, in which it established that the punishment provided for violations of the traffic law is a criminal fine, not the retention of vehicles.

In addition, he pointed out that it is not up to the authority, nor to the traffic agents to set the amount of the fine, which was another illegal practice, but to the judges. He established that when transit agents act outside the law, they incur violations of fundamental rights protected by the Constitution, such as transit, property, due process, and the right to defense.

The TC established that the seizure of a vehicle is only feasible in the following cases: If it does not have a license plate; if you travel with a license plate that does not belong to you; if it alters or erases the chassis number, if it displays a plate not prescribed by law, and when the vehicle is involved in a traffic accident in which the driver ran away.

Examining the current legislation, it only authorizes the removal of vehicles in some situations, just like the old legislation.

These cases are indicated in articles 189, 242 and 245 of the legislation, among which are the following: that does not have registration and plate; give a use other than the authorized one; do not carry the certificate of ownership or a copy of the documents that authorize you to use as a substitute for it; if you do not display the plate, or it has been mutilated, altered, suspended or canceled and if you have not renewed the tag. Also, when they are parked in prohibited places, and when it is determined that the vehicle is stolen.

However, the same law 63-17 establishes, in the final part of paragraph III of article 189, that “In the event that the violation can be corrected in the place where the infraction is raised, once the situation is corrected, it will not give place to the trailer of the vehicle”.

As a penalty for incurring in prohibited acts, the legal norm provides for sanctions of a fine of 1 to 3 minimum wages in the centralized public sector, and the reduction of points on the driver’s license.

Obligation to notify the owner

In article 243, Law 63-17 puts in charge of the National Institute of Terrestrial Traffic (INTRANT) the obligation to publish each month the list of all vehicles that have been temporarily removed in digital media and on its website.

It grants a period of 90 days for the owner to claim the vehicle. In case of not doing it in that time, it authorizes the Executive Power to sell it in public auction to cover the expenses of the service of the trailer, deposit and of the publication.

It contemplates in paragraph II that in the event that a surplus is generated from the public auction, after covering the amount of said services, it will be delivered to the owner of the vehicle. And if the owner does not claim that surplus either, the law provides that it will enter the single State account.

The law states, in article 244, that the authority in charge of the administration of motor vehicle deposits is responsible for all vehicles placed in its custody, in its capacity as depositary, as long as they remain in its facilities.