Man who rescued children from burning bus in critical condition 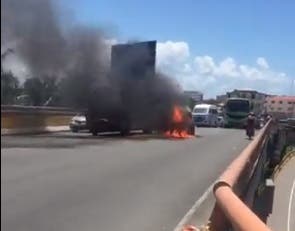 Carlos Mazara is in critical health after catching fire this Sunday while rescuing several children from a bus on fire on the elevated road that connects Los Tres Ojos with the Las Americas Highway.

This was reported by the director of the burns unit of the Hospital Traumatológico Ney Arias Lora, Eddy Bruno. She indicated that the 42-year-old man was returning from the church at the time of the tragedy and had 75 percent of his body surface burned.

The doctor said the burns are “second degree deep and superficial, distributed in the front trunk, back, head, face, upper and lower extremities.”

Eddy Bruno adds that Carlos Mazara remains on mechanical ventilation and that the medical staff of the health center is in the hydration phase due to the severity of the burns.

Two girls, three and six years old, died during the incident, while two others remain in stable conditions at the Robert Read Cabral Children’s Hospital.

A hero in my book!

The media reported Carlos Mazara was the driver of the van. HIs actions to save the children are extraordinary. Hope he will recover from his injuries well.