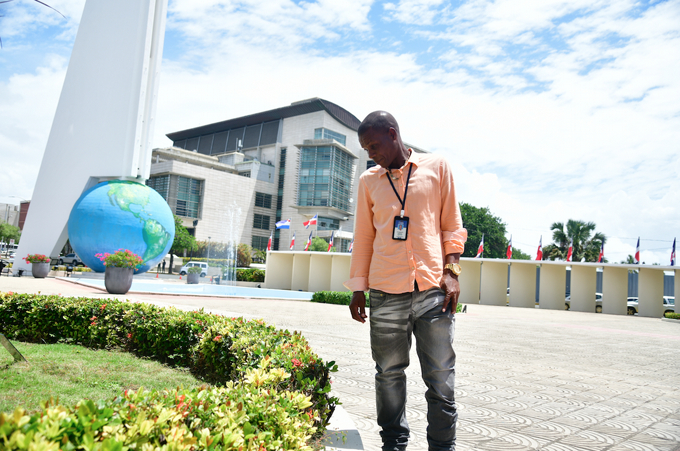 With nothing more than his desire to “get moving,” Green Green emigrated from Samaná after the death of his parents, in 2000, and as he walked along the Malecón in Santo Domingo he probed the corner or “sombrita” in which he would lie down to sleep to continue the next day in search of a job opportunity

The raindrops hitting his forehead at night and the sun burning his back in the morning are how Jesús Green Green spent his days, a 52-year-old man who for the past 20 years has taken a park in the capital city as his home, which would later become the reason for his livelihood.

With nothing more than his desire to “get moving,” Green Green emigrated from Samaná after the death of his parents, in 2000, and as he walked along the Malecón in Santo Domingo he probed the corner or “sombrita” in which he would lie down to sleep to continue the next day in search of a job opportunity.

“It was very difficult because they told me that because of my age they wouldn’t give me a job. I left it like that,” he said, while detailing that with these recurrent responses and having a prosthetic leg that limits his mobility, he had “completely” lost hope.

As a result of the difficulty of finding a job, he decided to start parking cars together with others who, like him, lived in the Pabellón de las Naciones, in the National District.

For Green Green, the most difficult thing about taking on the Parque Centro de los Héroes or “the ball of the world,” as it is popularly known, as a home was facing the rainy days.

“When it started to rain, look girl …,” he repeatedly emphasized without finishing the idea in any of the cases.

As he explained, when the weather was unfavorable for him, he took shelter in what now works as a municipal surveillance station.

“We got in there. That was always open,” he specified.

On the contrary, when the sky was clear, Green Green would crawl through concrete arches until he reached the roof.

“I climbed on my back as best I could. So, pushing back ‘back,” he described while trying to accompany his explanations with gestures.

However, despite the efforts he had to make, he said with a laugh that it was worth it because “it’s very cool up there. That was the fan up there.”

A change of life

In the simplicity of its days, what Green Green did not expect was that “his house”, the park, would be intervened by the Mayor’s Office of Santo Domingo (ADN) for its renovation, as part of a plan to rescue areas and spaces public.

With sadness, but not fear, the man spoke with the director of Innovation and Special Projects of the council, Yolanda de la Rosa, who gave him what she defined as “a change of life,” a job, and a new home.

“ They gave us 15 days of tests … They told me to find a room and tell me how much it costs and they rented me a room,” recalls Green Green.

“OH! But come here, I felt great joy,” he added with a smile that did not disappear from his face again during the rest of the interview.

According to information obtained by this means, the capital ‘city council has employed about 10 people with similar conditions to those of Green Green, who now perform paid work supervision, monitoring, and cleaning parks where they slept before.

The native of Samaná highlighted that with the first check he bought a cell phone, to be able to communicate with his brothers, who are engaged in agricultural work in his birthplace, with whom he spoke a few times a year.

“I didn’t communicate with my family, nothing, nothing, because I didn’t have a phone. Sometimes he went two or three years without speaking. Now we talk a lot. Every day I talk to them,” he stated.

Great story. But thousands of Dominicans do not have ID cards and cannot work legally. The government could assist if it was easier to obtain cards at a government office. Streamline the system with less stipulations. Give local electoral offices who know their community more power. Why must people hire abagados to get an ID card ?