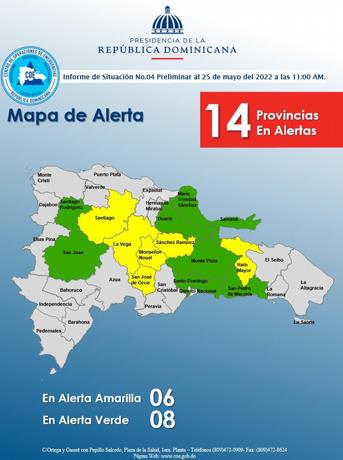 Santo Domingo, DR
The Emergency Operations Center declares a yellow alert for six provinces and green for eight due to the incidence of a trough, which, combined with the effects of the east/southeast wind that will bring humidity and instability, will provoke downpours over the country.

The National Meteorological Office (Onamet) reports that the trough persists, causing an environment of heavy downpours at times, thunderstorms, and wind gusts in parts of the country. Hence, they maintain the levels of alerts and weather warnings for landslides and flooding of rivers, streams, and creeks.