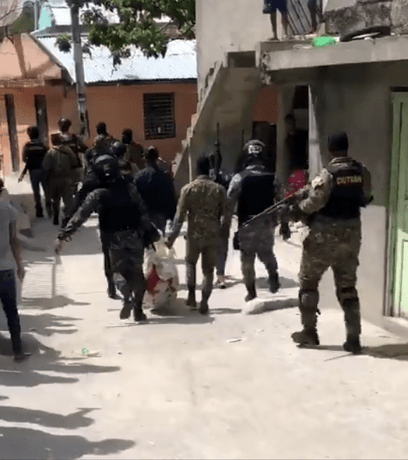 Since President Luis Abinader launched the crusade against crime, integrating the military as an aid force to the police, the expectation of concrete results marks citizens’ expectations.

Yesterday, police shot dead an alleged criminal, only identified by the alias “Nanito,” during an intervention in the La Puya neighborhood of Arroyo Hondo.

He was an alleged criminal, a member of a dangerous gang that had the area in jeopardy, according to a source revealed to journalists from Listín Diario.

While a police team was supervising the area of La Arenita, in La Puya, Arroyo Hondo, “Nanito” began to flee when he was identified and then entered a house to take shelter.

Upon being trapped, according to the source, he attacked the police, injuring a private in the left hand.

An audiovisual circulates on social networks in which officers and citizens are observed walking on the roofs of the houses in the sector, weapons in their hands, in search of “Nanito.”

When the body was taken out, wrapped in a bloodied sheet, residents of the area were seen crying.

Since Friday and early Saturday morning, when the patrolling began, there have been six deaths and eight wounded.

On Friday, two people were killed.

Another case occurred hours later on the Las Americas highway, where unknown persons aboard two vehicles shot dead an Italian man while he was driving his truck.

In addition to these cases, a young man was killed during an attempted robbery of a jewelry store on Independencia Avenue.

Early Saturday morning, in San Francisco de Macoris, eight people were shot and wounded after a family was ambushed.

As of yesterday, the police had no response to any of these cases, limiting itself to saying that “investigations and the search of the scene continue to identify those responsibly.”

The police-military operations continue, while yesterday, a report detailed that in Santiago, La Vega, Moca, Valverde, Montecristi, Montecristi, Santiago Rodriguez, and Dajabon, 300 persons were arrested, out of 598 persons searched. In addition, a total of 297 motorcycles were detained.

Background, support
One day after the beginning of the extensive police-military deployment in neighborhoods of the capital, to contain the torrent of delinquency that has extended its impetuous thrust towards other zones, the communities have valued the operations by land and area for what they judge reasonable to give this a permanent character.

Yesterday, Sunday, a tour of the streets of the neighborhoods of Capotillo, 24 de Abril, Luperón, and Simón Bolívar made it possible to observe the development of these citizen security operations.

Residents in these sectors insist that this should not be a one-day patrol but a permanent patrol. “Yes, they were flying around in helicopters, but they should do it all the time. So the police have to work, but not just one day, the patrolling should be constant, but they come today and last a month to return”, said a resident of Capotillo, who preferred not to identify himself for fear of reprisals.

“We have to follow up, because what follow-up gives good results,” he added.

Daniel Sánchez, a shopkeeper, believes that to reduce crime, “it is necessary that police vigilance be permanent because at any moment an assault can occur.”

Round of complaints
In the Barrio Nuevo sector of Sabana Perdida, residents complain of a continuous wave of muggings which makes them uneasy.

Meanwhile, there is a lot of fear in the Los Multi-sector of Los Guaricanos because criminal groups continue to “do their thing” at night.

“We can’t go out on the street at night because the muggers leave you with nothing,” said Michael Martínez, a neighbor of Barrio Nuevo.