Lies strain official relations between Haiti and the Dominican Republic 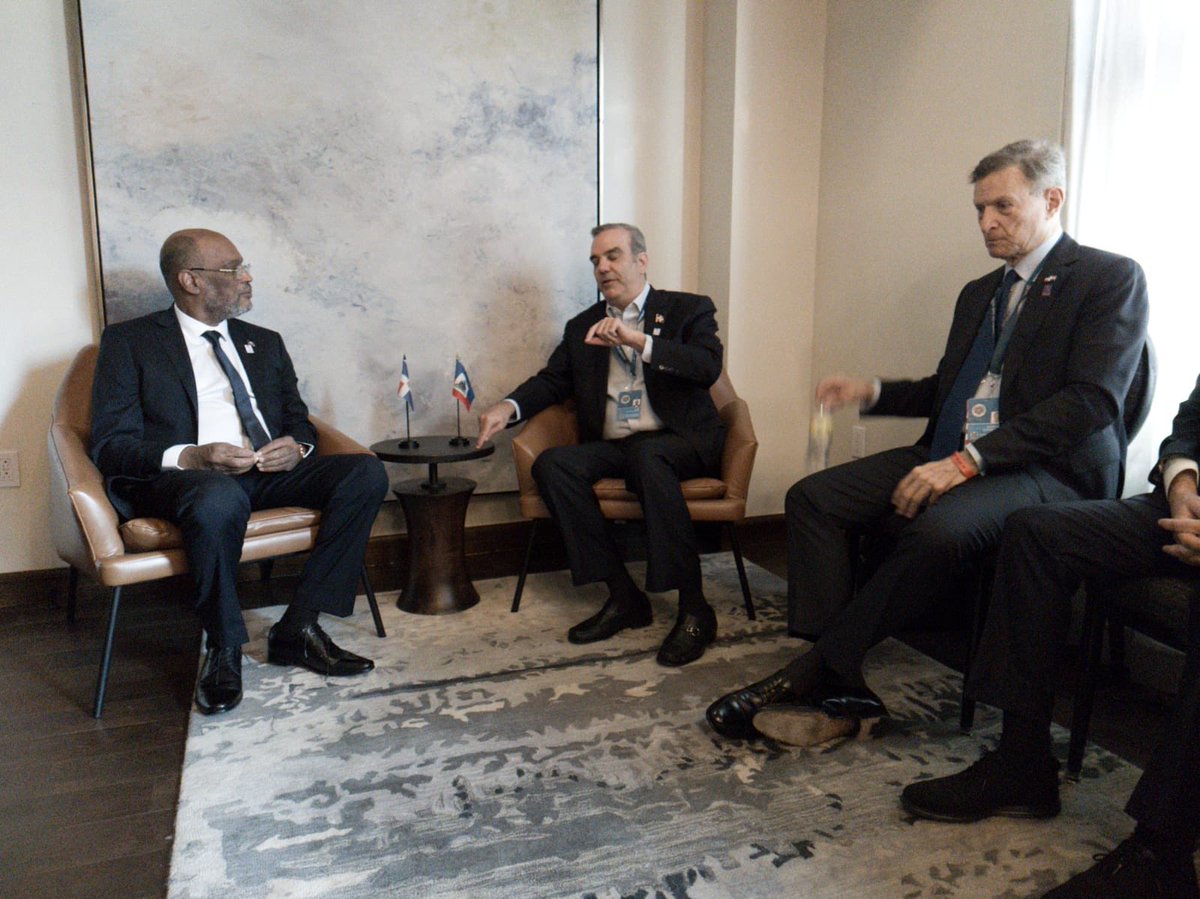 At a press conference yesterday, where he evaluated his participation in the Summit, Henry referred to what happened after the meeting with Abinader, a situation that “has created a conflict and has caused a lot of ink to be spilled,” he said.

Santo Domingo, DR.
Haiti yesterday regretted “the misunderstandings” that occurred after the meeting between the Prime Minister, Ariel Henry, and the Dominican President, Luis Abinader, on Thursday on the sidelines of the IX Summit of the Americas, held this week in Los Angeles (United States), according to an EFE cable dated Port-au-Prince.

In a press conference yesterday, where he evaluated his participation in the Summit, Henry referred to what happened after the meeting with Abinader, a situation that “has created a conflict and has caused a lot of ink to flow,”

According to a statement released a day after the meeting by Henry’s office, both “agreed to regularize the situation of Haitian immigrants and workers in the Dominican Republic, providing them with identification documents and revitalizing the Haitian-Dominican Mixed Commission.”

However, the Dominican Government affirmed hours later that in the meeting between Abinader and the Haitian Prime Minister, “there was no type of commitment” to regularize Haitian workers in the country, thus denying the neighboring nation.

The Dominican Presidency also denied that at the meeting, Abinader had expressed support for the candidacy of the former Minister of Public Health, Florence Guillaume Duperval, for the post of Director-General of the Pan American Health Organization (PAHO), as the Haitian government claimed in its communiqué.

Hundreds of thousands of Haitians, most undocumented, reside in the Dominican Republic, where they work mainly in agriculture, civil construction, and informal commerce.

The Dominican Republic began last February the construction of a 160-kilometer fence along the 391-kilometer common border, a project with which the Dominican government intends to curb immigration and smuggling.

The denials
After Luis Abinader assumed the presidency, the Dominican Republic has had to deny the statements given by the Haitian authorities on two occasions, following a bilateral meeting between the two nations.

In May 2021, Abinader and Jovenel Moïse met in Ecuador, a country to which they traveled to the inauguration of Guillermo Lasso. After this meeting, the then-Haitian president said that both presidents had discussed the dam construction on the Masacre River (a work that brought rejection and disagreement from the Dominican side) and also decided “not to fall into the games of Dominican and Haitian ultra-nationalists.”

“I have had in-depth conversations on issues of common interest.

We agreed not to fall into the game of Dominican and Haitian ultra-nationalists and to continue working for the benefit of both peoples,” Moïse posted on his Twitter account.

In response to this, Dominican Foreign Minister Roberto Álvarez indicated that about the construction of the dam, President Abinader had stated that the situation was in the hands of the foreign ministries of both nations.

“President Abinader dialogued with his counterpart, President Moïse of Haiti, in Ecuador, and in relation to the question of the Dajabón River, he only told him that this issue is in the hands of the chancelleries of both countries,” Alvarez responded to the comment published by Moïse.

After the assassination of Jovenel Moïse on July 7, 2021, the main authorities of the Dominican Republic and Haiti had not met.

Nothing has gone well.
In January 2021, the environment ministers of Haiti and the Dominican Republic signed an agreement to develop joint plans and actions to conserve the natural resources of both countries and fight against the adverse effects of climate change. But unfortunately, this pact also failed to make progress.

Clashes
What has remained a constant have been the statements issued by Haitian authorities and which have been rejected by Dominicans on occasions. Such is the case of the Minister of the Interior, Jesús Vásquez, and the former Haitian Chancellor, Claude Joseph. The latter indicated that the Dominican Republic is experiencing an “increase in crime,” which upset Vásquez.

Personalities react to attacks by former Chancellor Joseph
Displeased reactions have been generated by the latest tweet from former Haitian foreign minister Claude Joseph, who accused President Luis Abinader of using Haiti to advance his political agenda and not fulfilling his promises at the national level.

“President Abinader cannot stop using Haiti as a pawn to advance his political agenda. This is a man who does not fulfill his promise at the national level on many issues but thinks he can use Haiti as his last resort to pandering to the ultra-nationalists in his country to win votes. Hypocrisy…” he wrote on Saturday at 2:43 p.m. Since then, personalities from the Dominican Republic and Haiti have reacted to the comment.

Although the responses have not been from the Dominican government, as on previous occasions, personalities such as businessman Felipe Vicini were one of the people to react to the comment.

“Political nonsense on your part. Please tell us what you did or are doing to solve the problems in your country. Haitian citizens cannot obtain identity documents neither in your country nor in any Haitian consulate abroad. Hypocrite,” wrote the businessman quoting Joseph’s tweet.

The leader of the National Progressive Force (FNP), Vinicio Castillo Semán, accused him of being a provocateur. “The provocateur Claude Josep, the main suspect in the death of Pte Moise, attacks Pte @luisabinader for his firm defense of the RD summit of the Americas.

It was actually a set up between the US and the Haitians to have Luis Abinader sign up an agreenment to regulated millions of undocumented Haitians in DR. Thankfully, presidente Luis Abinader did not fail for the trap.

let’s keep sending them to Panama so after Panama they will be on their way to else we’re in the America’s we don’t have enough land to add another 2 million Haitians they already mass migrated in the past 50 years you can tell by the people we are a mix of everything but the Haitians need to stop because they are destroying our identity..

Failed state of haiti dont know what to do with the country, those haitians that escapes their country never go back and never invest in their land , those people hate themself so much they rather destroy their own country rather than fix it, everything is happrning in haiti is haitians fault