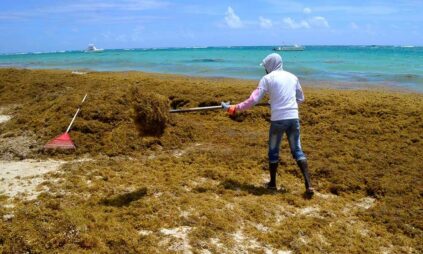 The eventual installation of a sargassum bioprocessing plant could generate a solution with a great impact in mitigating that plant on the coasts of the Dominican Republic, according to former Sports Minister Marcos Díaz, who represents Origin by Ocean in the country, a Finnish algae refining company.

He indicated that the aforementioned plant is part of the second phase of operations of Origin by Ocean. At the end of last June, it began its operations in the country with the export to the European nation of sargassum collected in the eastern region, specifically Punta Cana.

He stated that the arrival of the entity to the Caribbean country was made after visiting several areas affected by sargassum.

“We discovered that the Dominican Republic lent itself to be the place to start the first phase, where the company tries to transfer the sargassum to its plant in Finland,” he said.

Díaz pointed out that the first phase of the project contemplates the export in a year of 100 containers, which can store between 20 and 40 tons of algae, through the collection of sargassum from the coast and then “remove it without losing moisture and nutrients, freeze it, and later transfer it to Finland for use.”

The former official stated that, once this part is completed, they hope to be able to generate a large-scale solution to sargassum with the plant, since the algae could be processed a few meters from where it is removed.

When asked about the location of the plant, he pointed out that the ideal is for it to be close to the eastern zone, close to “where the raw material is found,” according to Diario Libre.

Díaz said that the company uses sargassum to create dyes, food thickeners “for products that want to maintain a vegan certification” and cosmetics.

He added that the project seeks to be bio-sustainable, so clean energy is used to guarantee responsibility towards the environment while noting that two other containers with sargassum are expected to leave the country next week.

He ruled out the presence of the company in other provinces, since “there is an interest in extending the arm beyond.”

Origin by Ocean exports sargassum with the collaboration of SOS Carbón, Grupo Puntacana and Nodo Logistics.

This will be good for the economy. What impact will it have on the environment. How much water will be used to clean the seaweed before it is set out to be dried?