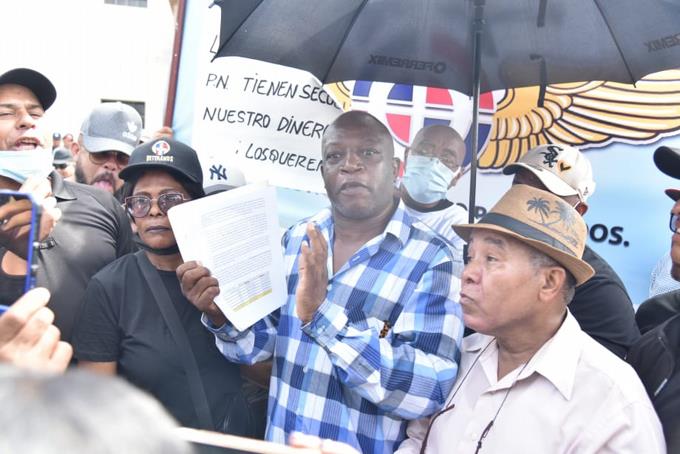 Protest in front of the National Palace.

An incident between police officers was recorded during a protest in front of the National Palace.

Retired police officers called for a peaceful demonstration in front of the Government House to demand salary per year, medical insurance, and other necessities.

The struggle between the agents also led them to exchange insults because the protesters crossed the fences put up by the police in front of the Palace.

“They sent us home like dogs, without medical insurance, they took it away from us after we spent 37 and 30 years in the institution,” said Lieutenant Colonel De Champs of the National Police.

Veteran police officers are asking for the help of President Luis Abinader and Police Director Eduardo Alberto Then.

“We are not asking, we are claiming our right. Another thing, our hospital was reallocated to civilians. And we want our money,” said the lieutenant colonel.

Lieutenant Colonel Juan Fernando Mota Rodríguez, another of the retirees, said that the police cooperative is the one that administers and holds their salary money per year.

The director of the cooperative held a press conference and said that “the annual salary program is deficient” and that “in 2002, the cooperative was decapitalized by lending 184 million to the hospital for reconstruction.

They don’t care! They didn’t care about you all when you were active police earning 5 and 6K pesos a month and they certainly do not care about you now. You were used and now you are a burden to the state. They will never be able to afford their landcruisers and hilux trucks if they pay you what you deserve.

It is sinful for the government to rebuff the retirees. The resources due to them were caught up in the three cups and a ball shell game. It was most likely orchestrated by government culprits seeking to skim off funds for their own use. Is the “decapitalized” cooperative the Pandora’s box to be opened? Who was the leader at the time when it happened to the cooperative, Leonardo or Hipolito? Another scandal to be exposed?