What is the Senate doing that it does not want the public to know? 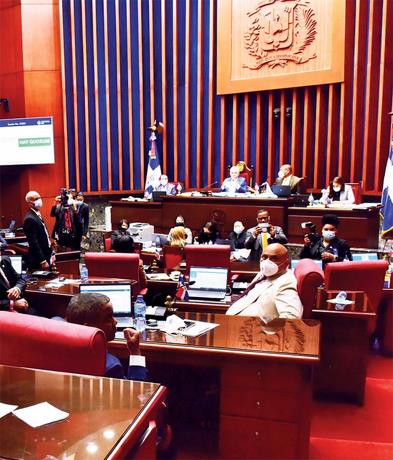 The Senate does not provide answers to requests for access to information.

Santo Domingo, DR
The resentment of a senator for not being able to receive internal information on the bill of the Law of Extinction of Ownership was the straw that broke the camel’s back and questioned the level of transparency in the Senate of the Republic.

Eduardo Estrella’s administration in the Senate has been marked by infrastructure works, both at a physical and technological level, including implementing an automated voting system for “greater transparency.”

However, the legislator from Santiago has never shown interest in developing a platform under which the senators’ management of the Barrilito would be transparent.

Only on one occasion did the Senate allow the entry of a journalist who disclosed the content of hundreds of pages containing the invoices of expenses of these funds. Since the publication, access has not been allowed again.

Several senators were consulted about the expenses they give to Barrilito, and the answer tends to be similar: boxes of dead people, medicines, and in general “aids” to people of their province. However, none of them has had the initiative to fully show the monthly expenses made with this millionaire fund.

However, several requests made by journalists of the Listín Diario have ended without response and without consequence on the part of the entity in charge of governing the law.

Among the requests made which have gone unanswered are the expenses made by the Senate for the legislators’ trip to a hotel where the Penal Code bill was debated; the funds granted to the legislators to be spent on Mother’s Day, as well as the delivery of cards or bonuses in December for the activities usually carried out by the members of Congress in their respective provinces.

The unanswered requests made through the Single Portal of Request for Access to Public Information (SAIP) are left desolate on the platform, with the response time granted by law with legends such as “Compiling information” and “Awaiting the corresponding Department.”

Although this is not the majority of cases, the Senate reserves the right to grant information depending on what is requested.

Limits to journalists and senators
Last July 4, a commission led by the spokesman of the Dominican Liberation Party (PLD) in the Senate demanded from the Commissions Coordination Department the minutes and audios of the bicameral commission that studied the bill of law of extinction of ownership, documents that, according to the congressman himself, they refused to hand over.

Yván Lorenzo, a spokesman for the PLD, accused the Senate of “kidnapping and manipulating” the minutes of the commission for the extinction of ownership, alleging that he had been requesting the documents for several days to “spread them to the public opinion.”

Next to the commission was a group of journalists who were prevented from entering the office and described as a “mob of people” by employees of the upper chamber.

Another event occurred last June 23, when the senator of the Modern Revolutionary Party (PRM), Faride Raful, prevented a colleague of her party from giving information to journalists about what was discussed in the bicameral commission of extinction of ownership by abruptly opening the door of the room, interrupting his statements and forcing him to enter the meeting and then calling an impromptu press conference.

In matters of transparency, the Senate still has pending debts and could imitate the actions of the Chamber of Deputies.

The limits imposed on journalists in the Senate have been present since the first day of the administration, with examples such as the impediment to entering the chamber and certain areas; the non-notification of visits to the president Eduardo Estrella, who also has no interaction with the press.

The obscure activities of the Senate is not healthy. What are they cooking?