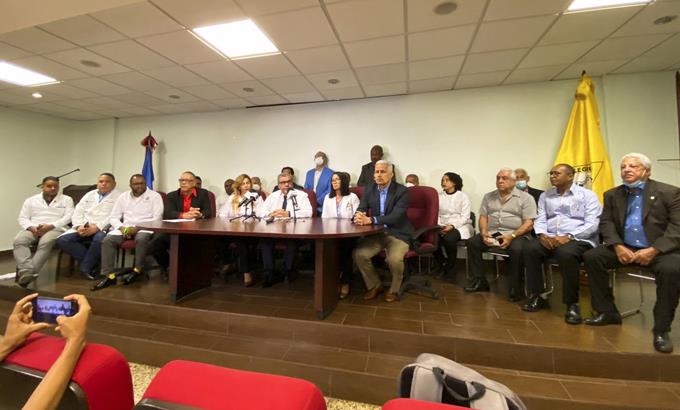 Dr. Senén Caba, president of the medical union, asked to stop the cancellation of personnel to avoid further deterioration of health services in public hospitals.

Santo Domingo, DR.
Hospitals are operating with a deficit of more than two thousand general practitioners and specialists, especially those in the interior of the country, negatively impacting the quality of care.

This was revealed yesterday by the Dominican Medical Association (CMD), as it demanded the opening of the hospitals that remain closed and medical competitions in the different provinces of the country that have been left without enough doctors because they have been pensioned, have been transferred or have died, generating a deficit of more than two thousand general practitioners and specialists.

At a press conference, the union announced that it would remain in permanent session to demand a solution to the difficulties affecting health care in the country.

Its president, Senén Caba, said that the guild is deeply concerned about the health situation of the nation and demanded that once and for all, the hospitals still closed by previous governments be opened.

He warned that this opening must occur without the need for “volunteer groups” of people linked to corruption and with clear intentions of negotiating at the expense of the people’s health.

“We call for a halt to the cancellations and the immediate cessation of the repression unleashed both in the capital and in the provinces of the country,” said Caba.

Respect for pensions
He said that the union demands respect for decrees 127-21 and 353-21, by which hundreds of doctors were pensioned based on Law 414-98 and which today, from the Ministry of Finance and the General Directorate of Retirement and Pensions (DGJP), are disregarded, in apparent disregard of these presidential decrees.

“For this reason (and for more) as of today, our centennial and glorious institution enters into Permanent Session status.”

He summoned its national leadership to meet this Thursday, July 21, at 10:00 a.m. at this central headquarters to set the path of struggle to follow to assert their claims.

A study of the sector
Last April, the Alliance for the Right to Health (Adesa), made up of dozens of organizations, presented in Santiago an in-depth diagnosis carried out in different regions, with some 50 health care centers and representatives of the users of the services on offer, in which they found severe deficiencies in the first and second level hospitals.

Broad consultation was carried out in hospitals.
“The findings in this research are the result of structured interviews with 50 hospital directors and a survey applied to 1,229 users of these health centers. In addition, 69 local leaders were consulted through local health region groups,” the study indicates.

Llaniris Espinal, coordinator of the Alliance for the Right to Health in Cibao, deplored the great ills of the health centers, especially in the towns farthest from the big cities to the point that 92 percent of the municipal hospitals lack ambulances.

After the Alliance’s diagnosis, with the participation of trade unions, professional, environmental, peasant, and community groups, a set of recommendations were made for the State to promote health policies to improve the operating capacity of these centers of the hospital system.

50 hospitals
When presenting the study as the result of an investigation in more than 50 hospitals throughout the country, the Alliance for the Right to Health considered it necessary “to generate a political and social pact for health, to change the neoliberal model that operates in this sector and to build a proposal for an alternative health system.

New approach
Llaniris Espinal said that Adesa is working in this direction and has a decalogue of proposals, which could serve as a basis for the analysis and discussion of the issue. However, it is also necessary to create a robust social movement for the right to health in the country.

The headline should read “Lack of Quality Physicians affect healthcare”