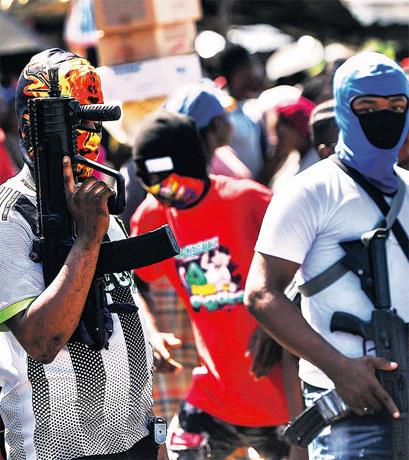 Santo Domingo, DR
When the Dominican Republic was marching for the international community to seek a solution to the Haitian problem in Haiti, the U.S. newspaper Washington Post editorialized on the cruel reality of the poorest country in the hemisphere, the indifference and few actions of organizations such as the UN and the OAS, as well as the deportations of Haitians from the United States and the arrival of smuggled weapons.

The newspaper states that the country is immersed in a war between gangs, where people cannot work, food prices are rising, and there is no hope for peace or stability.

The editorial states that “without a strong international intervention, the country’s suffering will deepen. To ignore this reality is to be complicit in the world’s contempt for Haiti’s distress.”

The Washington Post editorial of Saturday, August 6, is reproduced below:

As Haiti sinks deeper and deeper into uproar, with much of its capital seized by gunfire and gang warfare, it has received recent deliveries from the United States of two commodities that can only add to its collapse: weapons and deportees. These exports, one smuggled, the other openly is the latest symptom of the world’s callous indifference and moral myopia toward the poorest country in the Western Hemisphere. As a result, Haiti has no functioning government, no democracy, no peace, and no hope. And the international community’s response is silence.

Last month, amid a spasm of armed violence that left hundreds dead, wounded, or missing in the capital city of Port-au-Prince, Haitian customs officials seized shipping containers they said contained 18 “weapons of war,” plus pistols. And 15,000 rounds of ammunition. According to Reuters, the items were shipped from the United States to the Episcopal Church of Haiti. The church denied any knowledge of the container, the contents of which were described on a cargo document as “Donated goods, school supplies, dry food.”

A deportation flight from Louisiana arrived in Port-au-Prince, the 120th plane to arrive in Haiti this year. Few Haitian deportees have the opportunity to apply for asylum in the United States. Since the Biden administration took office, it has sent at least 26,000 Haitian immigrants back to their home country, where life has been disrupted since the assassination of President Jovenel Moïse last summer.

According to advocacy groups, about one-fifth of those deported have been children; hundreds were infants under 2. The United States is not alone in its neglect. The Organization of American States, the whose stated mission is to prevent conflict and promote stability, has done little in Haiti beyond issuing tepid statements of concern. The UN Security Council recently extended the operations of the UN Integrated Office in Haiti for a year, a move that went unnoticed by most Haitians. For good reason: it has been completely ineffective.

The UN World Food Program has been routing food deliveries to the country by sea to prevent its trucks from being looted by gangs. Jean-Martin Bauer, WFP country director in Haiti, acknowledged that gang violence means “people can’t work, people can’t sell their produce.” Food prices have soared by more than 50 percent over the past year, a devastating number in a country where the WFP estimates that nearly half of the population of 11 million needs immediate food assistance.

Not surprisingly, since last October, the U.S. Coast Guard has intercepted more than 6100 Haitians attempting to reach the United States by sea, a huge increase over the past few years.

It is time to reevaluate the convenient piety expressed by diplomats, advocates, and activists that Haiti should be left to find a “Haitian-led solution.” The truth is that a “Haiti-led solution” is a pipe dream, and without strong international intervention, the country’s suffering will deepen. Ignoring that reality is complicit in the world’s disregard for Haiti’s distress.

Calling for it will not get it. It will take the kidnapping and/or death of a high level foreign official(s) by the gangs to make the international community to react.

The problem, as I see it, is that Haiti is an independent country with a Government even if that is non-functional. Neither the UN nor any other country can simply walk in to solve its problems. It needs an invitation from the Haitian Government. Unlikely as no doubt they still remember the disasters brought about by the last UN Peacekeeping Force.

If the UN, or worse still the US, were to arrive uninvited you can bet that Russia would use that as justification for their “special military operation” in Ukraine. I can just hear them saying you have invaded to control the gangs in Haiti to protect citizens and that is no different from us invading Ukraine to remove the “Nazies”.

Haití needs a dictatorship . A strong benevolent dictatorship. A group of people who truly want the best for their country and only want in return is the legacy of the good they have done. People who are willing to stand up to the bourgeoisie who only want to keep exploiting the country. Greed and corruption at all levels are the biggest problem. It needs to be controlled if there is any hope for progress. The gangs need to be dismantled. The infrastructure needs to be rebuilt. The people need free schools, books and uniforms to educate their children. They need good public health care. Once stability returns people will stop emigrating. Foreign aid and investment will return.

A dictatorship will first need to gain power by election so that they have the support of the majority of the people, but then they will need to take more. They will need to be in power for a while, because it will take a while . They will need a strong loyal police force for protection. Many will claim that human rights are being infringed on. These critics will need to be patient and look at the big picture. They are not solving the countries problems or willingly accepting their refugees. It will be the necessary price to pay for the restoration of the peace and the rehabilitation of the country.

The only thing the US is doing for Haitian is deporting them and sending weapons.to the country.