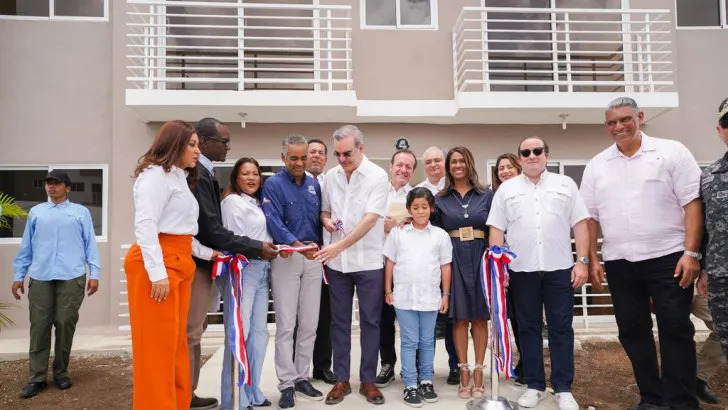 The President of the Republic, Luis Abinader, and the Minister of the Presidency, Joel Santos, delivered 120 houses in Los Alcarrizos, benefiting an equal number of families.

This housing solution had a private investment of RD$342.5 million. Of the houses, 56 belonging to the National Plan of Happy Family Housing (Pnvff) were delivered.

In his speech, the Minister of the Presidency said that the Pnvff is one of those great satisfactions, which, together with the team of the Vice-Ministry of Investment Projects, led by Vice-Minister Camel Curi, make it possible to deliver 120 housing units today. “This, ladies and gentlemen, is 120 families that will enjoy that longed-for moment when they can say: I have my own house,” said the official.

Santos announced that the Pnvff has 126 projects in the pipeline and 42 under development at the national level, which means a significant improvement in the quality of life of Dominicans living in 24 provinces. He also stated that “between now and the first quarter of next year, 2,500 homes will be delivered to the same number of families in the Dominican Republic.”

The families selected by the PNVFF will receive the Bono Familia Feliz, which consists of benefits from the Dominican State that include the Bono Inicial a la Vivienda, applied directly by the PNVFF, Bono Impuesto a la Transferencia de Bienes y Servicios (Itbis) applied to the initial payment of the house, Bono Mujer and Bono Tasa 7 años, which is an aid to the amount of the monthly installment.

The Praderas del Norte project will have 830 single-family and multi-family housing units with three bedrooms, two bathrooms, a kitchen, living room, dining room, balcony, and parking. The first stage will have 295 teams, and the subsequent steps will have 535 units.

According to the evaluation carried out by the Unified System of Beneficiaries (Siuben), the profile of the average beneficiary of this delivery is a woman between 23 and 64 years of age with a family of four, living in a rented house with a block or concrete walls, zinc roof, and cement floor. The beneficiaries paid an average rent of RD$7,182.7.

The National Happy Family Plan is the first program of accessibility to decent housing. It is aimed at Dominican families of social segments with great difficulties acquiring them, thus reducing the housing deficit. Furthermore, this initiative marks the beginning of the most extensive process of accessibility to a roof of one’s own at a national level to guarantee the security and health of the family.

This program is being developed through a public-private partnership process, in which the State will provide citizens who apply with the resources to have access to financing through different types of bonds that will help with bank payments.